Navagraha Ottam was a multi-day, multi-leg event.  Each of the four days, we stayed at different places and each day had multiple legs.  While the runners got up everyday and ran, the support crew had the envious task of taking care of everything else.  They had to ensure that the runners were supported on the road while working to get the breakfast, lunch and dinner ready at the same time.  Let me not forget the bedding and luggage.  Support crew also had to transport blankets, pillows besides the luggage of all runners.  So it was a durbar move every day.

Going to back to the food part, it is not just the preparation, but also serving the runners at different places as we kept moving.  The best laid plans can go awry and that's what happened on day 2.  Here is that story..

On the day#2 of the Navagraha Ottam, we covered 3 Navagraha sthalams.  The initial plan was to complete the temple darshans by 11:00 AM and reach Vanathirajapuram for lunch.  But, that proved to be too ambitious.  While the temples were close by, it tooks us longer at each temple and few of the runners also made a quick side trip to Uppliyappan koil from Thirunageswaram.  So, we started couple of hours behind schedule from our first stop.  This delay along with the harsh Sun took a toll on the runners slowing us down significantly.

On each day, first leg was the easiest.  runners were generally fresh after good night sleep and would comfortably cover 10 - 15k before the Sun came up.  That was the case on day#2 as well. We started from Thippirajapuram around 5:15AM and comfortably reached Thirunageswaram by 7:00AM covering about 11k. 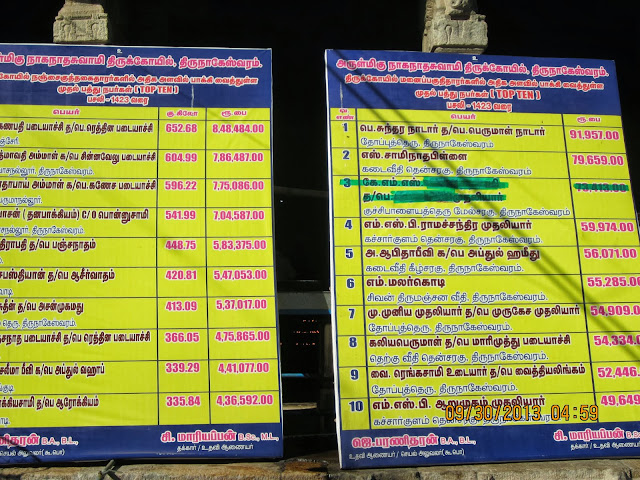 This is one of those 'only in India' types.  Temples trying to collect dues from defaulters through public shaming.  I have seen this many Tamil Nadu temples, but not sure of its efficacy.

We started from Thirunageswaram well past 9:00 AM and by that time Surya Bhagavan was out in all his glory.  This slowed us significantly and it took many of us over 1 1/2 hours to cover 11k distance to our next stop. 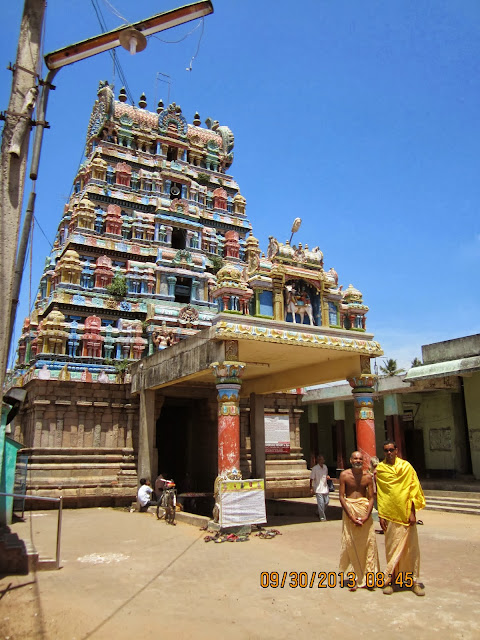 It was noon and the temple was closing down for the session.  Thanks to the magic of Selva and race director, Narayanan we were able to have darshan and the temple annadhanam sappadu. 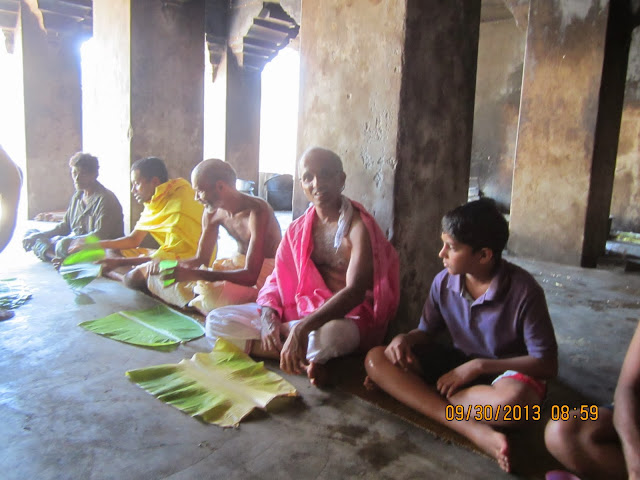 By this time, we were well past our schedule.  Our lunch was going to be at Vanathirajapuram, which is a good 12k away.  Runners who were already badly toasted and didn't have any juice left to step out on to the steaming roads.  Here is where the flexibility of the support crew came through.  Narayanan re-routed the lunch caravan to Kanjanur and we were allowed to rest within the temple premises.  While that was coming, Selva also arranged for us to have temple annadhanam food.  It was frugal and minimalist but tasted yummy for few of us who took it.

I started taping 60 second clippings of the runners talking about some aspect of the odyssey.  Here is Bib Bala talking about the first day run and what's in store for day#2 @ Thirunageswaram.

A short clip on the beautiful Thirunageswaram, temple tank.