I always say 'Running is better with company'.. and we had quite good crowd today even before 5:00 AM at Anna University start point..

Initially, I tagged along with Ramesh M, Ramesh S, Advocate Hari & Vilwa with an intent to do a half but that didn't last for long.. Ramesh M. and Hari took off.. perhaps chasing Shahid and I settled for a easy run with Vilwa, but not before trading some Advocate jokes with Hari..

After trading jokes, I only saw both of them at the finish point.. they apparently had done little over 18k at 5:45 pace.. Well done Ramesh M & Hari.. 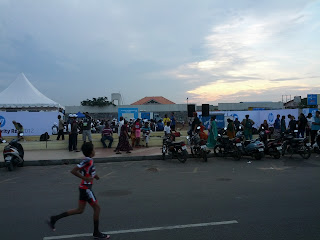 At Elliots beach, we saw a charity run being organized by HP and even saw Shreyas running that one.. Did you do a podium finish? Shreyas..?

Talking of podium finish, Airtel Delhi Half Marathon happened today and I hope Anandaselvan and all other runners from Chennai had a great run..

Now back to our run today..
Vilwa & I chugged along.. talking about digitizing Indian language books via crowd sourcing and the 'hot' topic of the week.. FDI in Retail..  These topics kept us engrossed and the distance just flew by.. this is why I say 'Running is better with company'..

By the time we reached back Anna University we had done little over half at little under 2:15..

Some pictures from today..

Also, I tried my hand on a short running video.. take a look and give me your feedback..