Have a Question for Chinmayi ? 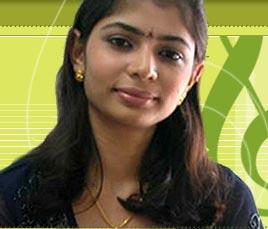 Chinmayi is the next guest in my Podcast interview series.

Chinmayi needs no introduction to folks who have following Tamil Films. She came on to the scene with a bang and was introduced by some big guns of the Indian movie industry. She sang "Oru Theivam Thantha Poove" for AR Rahman in Manirathnam's Kannathil Muthamittal which was a runaway success. Since then she has sung in numerous films in Tamil and in other languages.

Currently, Chinmayi is also hosting the Airtel's Super Singer show in Vijay TV. This popular talent hunt show has been on the air for several weeks now and might run for few more weeks. We are now left with 8 contestants and one of them will get an opportunity to sing for Harris Jayaraj.

I planned to talk to her about her singing, hosting and her translation company. Do you have question for her ?

Here is clip I had on Chinmayi. Incidentally my kids also sang in the same show and had recorded it a while back. (I loaded it yesterday but hasn't come online yet. In fact, I was holding this post for the clip to become active. Since it is more than the few minutes youtube tells me (actually 27 hours) and I want to get this one out.. I am going to publish this post now. I sure hope that the clip becomes active soon.)