I was in Kula Lumpur (KL) recently and noticed that there was no 4th floor optoin in several elevators. The numbers ran like this: 2, 3, 3A, 5.. I asked around and was told that the number 4 is unpopular amongst Chinese because in Cantonese four means die. So, the buildings that are owned by Chinese generally avoid number 4.

I was told by my Chinese friend that, in Cantonese 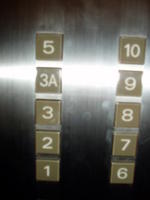 Now, what's the unlucky / unpopular number amongst Indians? Is it Number 8?