The pain of not doing what you like is greater than the imagined pain of doing what you like
When I read this, it struck a chord with me and felt as though it was written for me (Thanks for sharing Ashwin.  I know you are embarking on doing what you like in the coming weeks.. Good luck with that).  For too long, I have been a wannabe writer.  For someone who adores Sujatha and Friedman, I have had zillion reasons for not doing what I like.  But, this article shook me and got me out of my slumber at least for this post.

Now that I got that off my chest, here comes the post..

Never in my wildest dreams, I dreamt of being a podium finisher in a marathon and that too in a trail marathon.  So, when Senthil told me that I am 'podium finisher', I didn't believe him.  But he was right, I had come second my age category.  Wonder how? me too.. read on...

This marathon was a last minute decision.  I was looking forward to running Mumbai Marathon the same weekend (Jan 19) with the Chennai Runners gang.  But my business travel interrupted my plan.  It plucked me from Chennai and dropped me in the beautiful Bay Area.  The moment my travel plans firmed up, I looked for marathons in the vicinity and this was the only one I could find that was open.

After having 'experienced' a few trail marathons (Cinderella, Big Elk and Zermatt), another trail marathon was not my first choice.  But wanted to compensate the 'loss' of Mumbai Marathon and decided put me through another 'tough' marathon and registered for Pacifica Foothills trail marathon.  I was also hoping for this to be a practice run and help me finished the unfinished Comrades Marathon.

Going in, I knew it was going to be a toughie.  We had three hills to conquer twice.  With a total elevation gain of 6300' and an equal descent, which was equally challenging.  But, I had prepared my mind for a slow haul and that help. 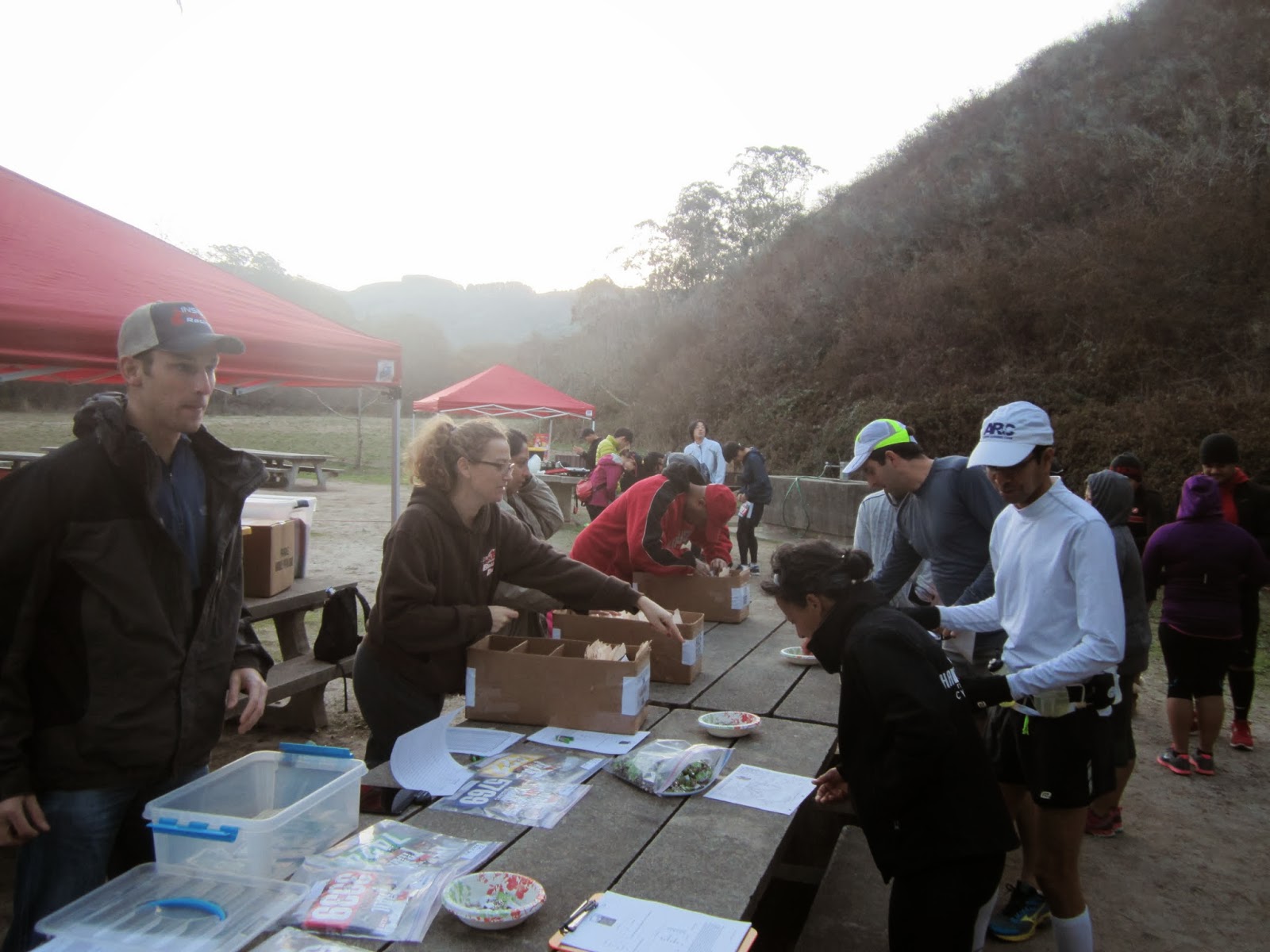 Bib collection was a breeze.  There was no expo the day before.  We just landed ahead of time and collected our Bibs in a few minutes.  The weather was little cold at the start and we weren't sure how to suit up.  But, Senthil and I looked through posts of prior year runs and decided to go light on dress.  We went with Shorts, full sleeve, cap and glove.  We even got rid of the glove after the first loop as the mercury was climbing and we were 'heating' up.

We took about 3 hours for the first loop and had just started another climb when I took a short clip which is the in the middle of this video after about 90 seconds.  You could see that I was struggling and it was a casual conversation for Senthil.  And he was bang on the time.  He said we would end up around 6:30 and boy we were close to that. Pacific ocean played hide and seek game with us.  we would be climbing through a steep ascent and from nowhere the ocean would pop up and the just mere sight of the mighty ocean would alleviate my pain, albeit only for a few moments.  After that, I will get back to my grunting and groaning mode and pacific would vanish behind the thick forest. 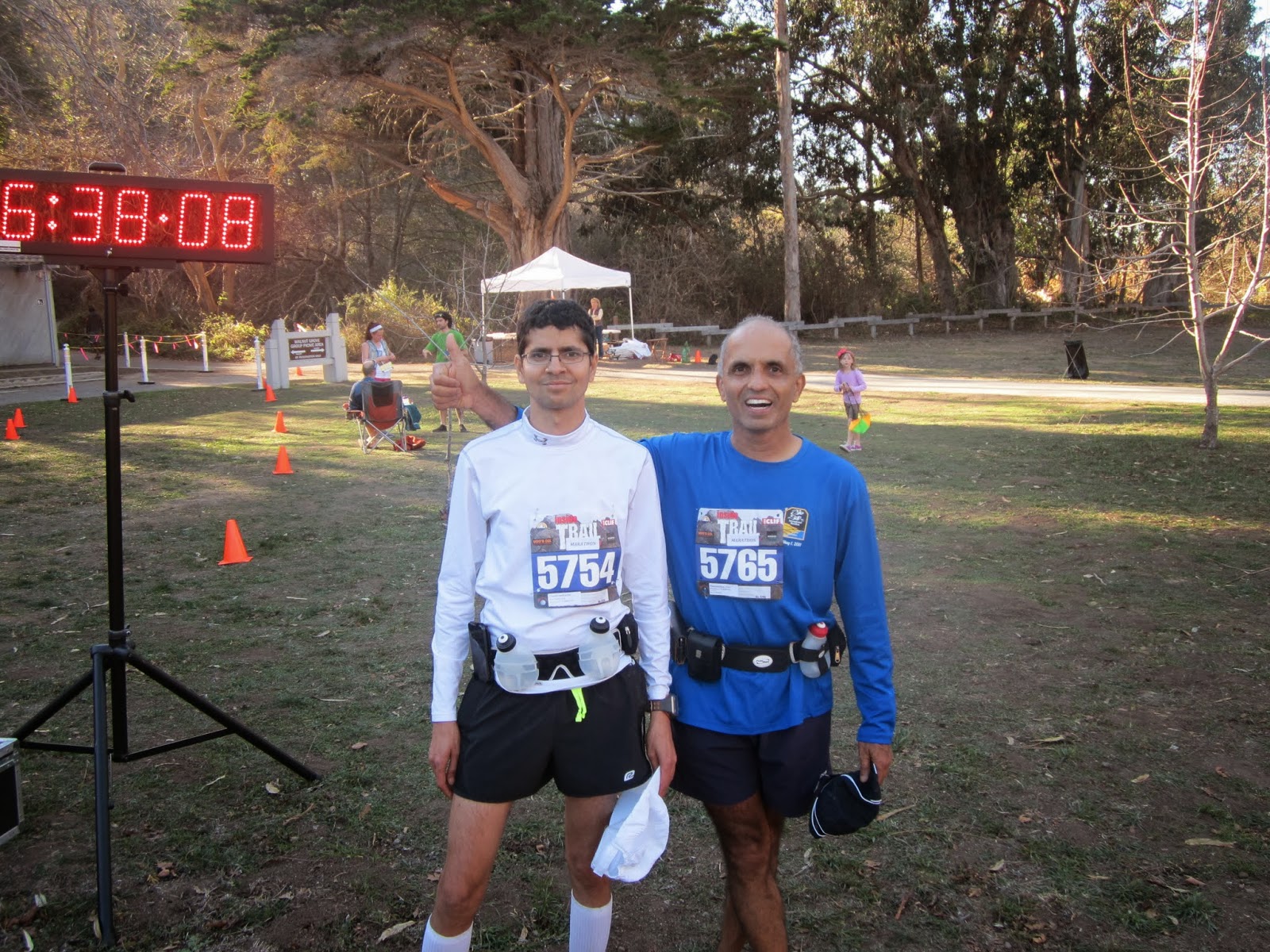 My running buddy Senthil.  He kept his promise and gave company for the entire course.  I was slow, huffing and puffing.  But Senthil kept us going.  We reminisced running in Chennai, how he became painter and along the way tried to find a solution for world's hunger.  Those conversations and the occasional majestic views of pacific ocean kept me going.  Thanks Senthil for the company, I know you could finished lot sooner but your company helped me finish sooner.  For once, sooner than you..even if it is by two seconds.

So, how am I a podium finisher?  There were only three runners in my age group (50 - 59) and I came second.  Senthil also was also second in his age group.  proof here.  Not sure if I will ever be a marathon podium finisher again.. so savoring this moment a little longer.. though I should get ready for my next marathon this weekend. 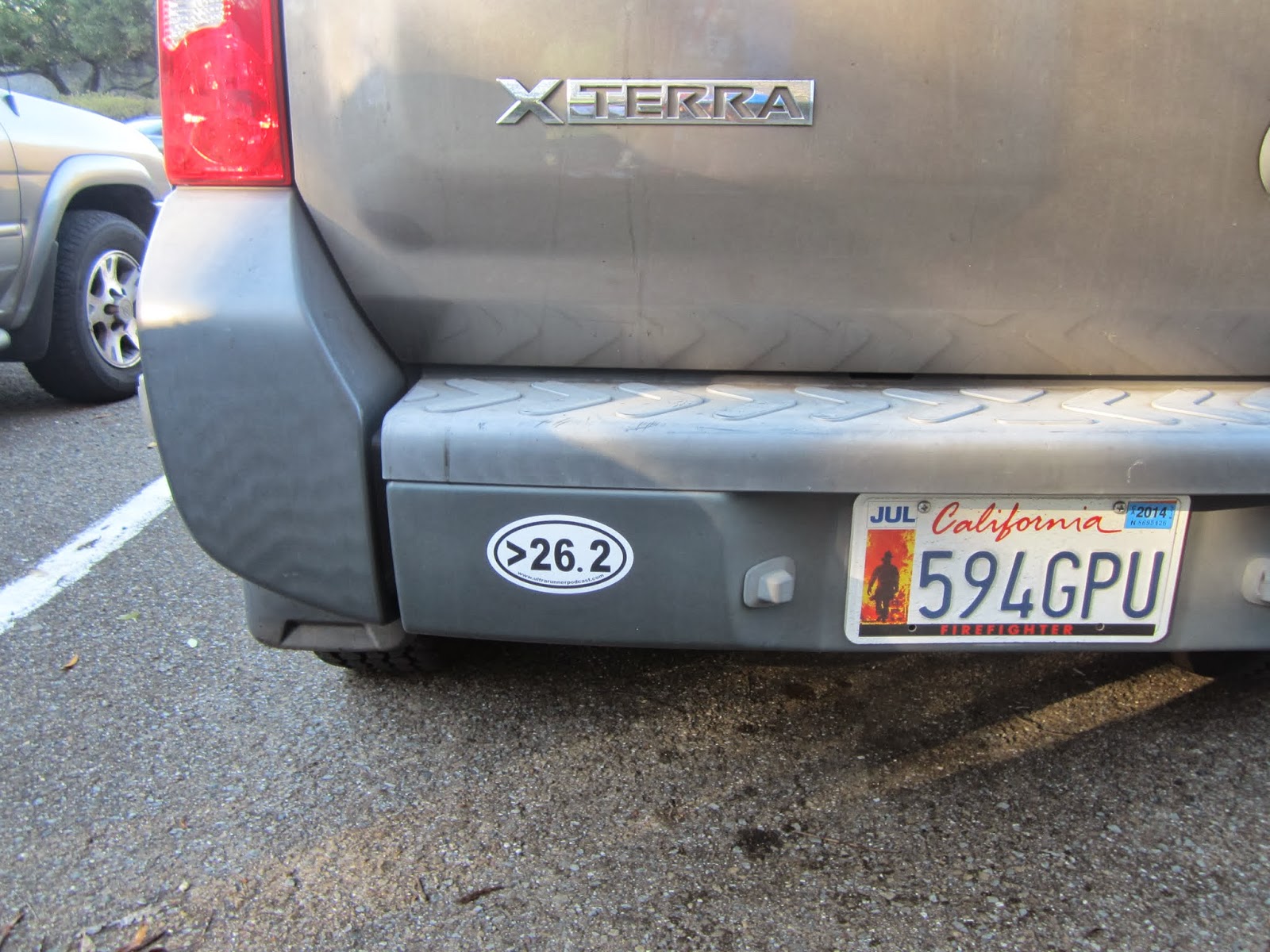 I saw these sticker in many cars in this region and Senthil explained the funda.  These are runners showing off their running prowess.  This guy, an ultra runner decided to make a slight modification to the 26.2 sticker.  He put a '>' symbol in front of the FM distance..

Overall a good prep run for Comrades and another marathon done.  I need more of this kind of hill training for Comrades but tough to get them in Chennai.  The St. Thomas Mount or Peru Hills in Chennai fade into insignificance compared to the Comrades hills.  But got to make better use of the hills I have got (That's the note for myself).

Marathon # 46 - Done
Name - Pacifica Foothills Trail Marathon
Place - South of San Francisco
Kind - Trail Marathon
Time - 6:36:44
A tough trail marathon, but a small and friendly run.  The scenic beauty of the pacific ocean and the hills is simply breathtaking.  For folks living in the Bay Area, this might not be a great run.  You guys have the hills and the scenic beauty all around you.  But for a guy like me from Chennai, it was awesome and a good training ground for Comrades.