I started this uphill Comrades well and was with the 11 hour bus for the first two hours.  After a while 11 hour bus marched ahead leaving me behind and minutes started ticking away.  Even then, I drew comfort from knowing I was much ahead of the 12 hour bus and was feeling quite confident of finishing the unfinished business from last year.

But few kms past the halfway mark, I lay sprawled on the ground twitching in pain.  What happened and why was I on the ground?  Here is that story..

My running friends know my simple running regiemen.  No two days missed, 10K per run and 50 per week.  This has come good for many marathons I have run thus far and took me across the finish line every time.  This was the case even after the appearance of heel pain from last Comrades.  I have run 8 marathons since the last Comrades and though the heel pain slowed me, I  always completed the marathon.  So, my simple principles are indeed good for marathons.

But since last Comrades DNF, I tried to train little differently.  I started doing Friday hill runs and core training on Saturdays whenever I was in town.  Also, I did several hill runs near Lausanne and did some Swimming cross training as well.

Though my heel was still a bother at the start line, I was confident of weathering it through and seeing the finish line at Petermartizburg.  As we started heading out of Durban, my heels bothered initially, but they got adjusted and settled comfortably as I moved along.  I should mention about the heel cups here.  I tried several of them to varying degrees of success and finally settled on Dr. Scholls massaging heel cups.  These were not available in Chennai and I got them from US just the week before Comrades and they did the trick.  These heel cups helped keep the pain at bay.

But a different problem started rearing its ugly head past the half way mark.  As the undulating hills continued, I started cramping.  I sensed it early and started 'adjusting' my running gait so as to not to disturb feet too much.  Even a slight movement of fingers inside the shoe caused great deal of pain, so I gingerly moved along at much slower but comfortable pace.

At this point, the 12 hour bus caught up with me and I decided to stick with it.  That was pershaps my golden chance for finishing the grueling race.  Since the bus was crowed, I went a little ahead but still be within the shouting distance of the drivers.  Few minutes after I boarded the bus, I heard the leader blowing his whistle for a walk.  I tried to obey the whistle and start walking.  But instead, I fell flat on the ground writhing in pain due to cramps blocking the bus.

The 12 hour bus passengers politely parted to give me space but moved along.  I lay on the ground for a few minutes afraid of moving any muscle lest should hurt more.  Then a good samaritan came along in the form a fellow runner who massaged my cramping right calf and eased the pain a little bit.  But I still lay on the ground unable or unwilling to getup overcome by the fear of pain.  I started crawling forward looking for a comfortable posture to getup.  I found that 'right' position after a few minutes, got up and started moving forward but at a greatly reduced pace.

By then the 12 hour bus was way ahead of me and if I had any chance of finishing then I must at least board that bus again.  I tried several times but each time I found myself cramping, putting me further and further behind. 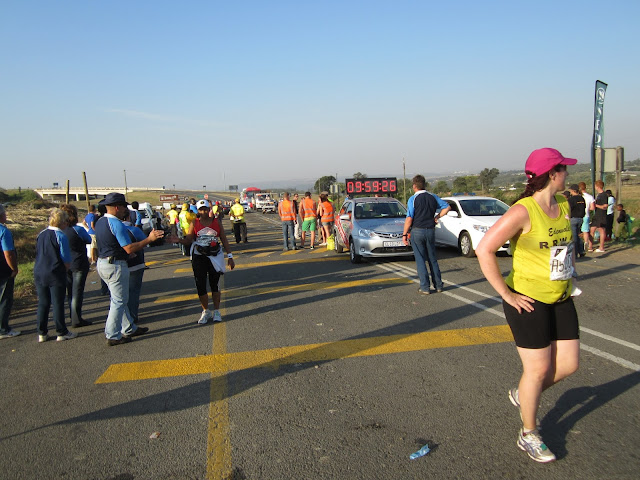 This cat and mouse game continued till 4th cut off at 67k mark.  I managed to squeak past the 4th cut off  just under 10 hours.  At this point I had 20k to cover in 2 hours which looked near impossibility given my condition and at that point I threw in the towel.  Thinking back, I wish I had spent the next two hours walking whatever distance I could instead of shutting myself down.

So heels, hills and most importantly cramps were three things that went wrong with my Comrades Odyssey this year.

But then over 10,000 runners finished that day and they also had the same hills & winds.  How come they able to do it as compared to 5000 (including yours truly) others who were not?  I don't know about the rest, but for me it is simply the case insufficient training.

The three simple running principles are NOT ENOUGH to get me through Comrades.  I need to train differently.  More about that and many more things in the coming posts.  I plan to do one post every other day.