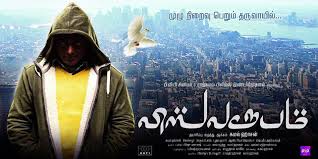 The highlight of Vishwaroopam movie was the debut of my friend Vidyuth as an actor.  He, Hari & I were the 'three idiots' who started Chennai Runners and it was good to see him after a long time albeit on screen.  He comes as Imtiaz, junior RAW officer who switches the drug brick and also rebuts Kamal with a sharp dialog about God.

Vishwaroopam is an average movie with brilliant production.  There are plenty of Hollywood spy / terrorism movies where the hero saves the world.  In Vishwaroopam, Kamal, a RAW agent save New York city.

Like most of Kamal's movies, this is his show all the way and is in every frame.  Other characters like Nasser, Shekhar Kapoor and Andrea are simply thrusted and / or wasted.  Regardless, Hats off to Kamal for playing three different roles effortlessly and proving his versatility yet again.

Like many of his previous movies, he dwells on duality of persona, atheism & God.  But, some of the dialogs in Vishwaroopam are totally out of place and seems to have to forced in.

Net net, Vishwaroopam is an average movie but a new canvas for Tamil.  Even with that, I wouldn't recommend this movie for any ward.

However, Do see it for all the controversy it stirred and you be the judge.