Sao Paulo is the largest city in Brazil and home to about 18 million people.  Brazil in growing and is perhaps already a economic powerhouse in Latin America.  Like many growing economies, the countries growth is also manifesting in the number of cars on the road.   Since numbers of cars is growing faster than the infrastructure, Sao Paulo now restricts cars by their registration numbers.  Cars ending with certain digits are not allowed during peak hours on rotation basis. 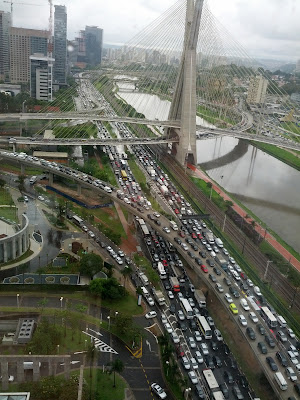 Locals tell me that this iconic bridge of Sao Paulo is only 3 years old and was built to handle the traffic projections of 2020.  But this is the scene most of the times.. looks like a huge parking lot. One of my colleague jokingly said, when the traffic light, which is perhaps on Sundays around mid night for 30 minutes, it takes only 15 minutes from his home to work... on rest of the days and time it takes anywhere between 45 minutes to 2 hours.

But, unlike Chennai, even though there are so many cars on the road.. I didn't hear blaring horns or impatient drivers trying to beat the signal and everybody else..  Something learn..