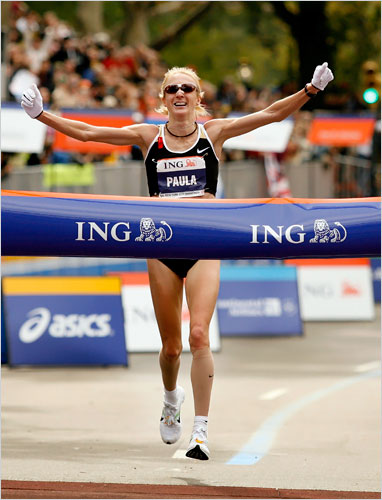 While the ChennaiRunners were running on the ECR last Sunday, the largest ever NYC marathon was also happening. About Forty thousand runners pounded the streets of NYC and Paul Radcliffe one of them. She won the marathon with a timing of 2:23:09. So what's big about this? It is BIG because she had given birth just 9 months back and had several nagging injuries that almost pulled her out of the race. But, she still ran and won.

There were also some sombre moment. Ryan Shay (28) who has run several marathons before this one died preparing for it. The cause of his death is still unclear, but how do you explain the sudden death of a 28 year old who had clean chit of health and had no known health problems. This news is kind of disturbing, but for somethings in life acceptance is the best answer...

But on the positive side..
NYC Marathon had a record participation of 39, 085 runners and a good number of them (38, 676) actually completed the race. The oldest participants were a 85 year old woman and 86 year man and both completed the marathon with a timing of 5:58:58 and 7:22:17 respectively. And here I am, thinking of 'retiring' from marathons after completing 10.

As I read through the triumphs of various runners, I am reminded of Randy Pausch last lecture where he talks about walls and the reason behind them..

Coming back to NYC Marathon, NYTimes has a wealth of coverage of here.
Posted by Ram Viswanathan at Tuesday, November 06, 2007