You Have My Vote 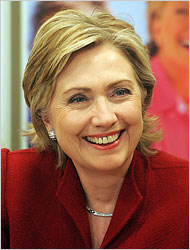 You Have My Vote
Hillary Clinton has finally made the long awaited announcement and joined the 2008 Presidential fray. Many people, even democrats are skeptical about her winnability as many of her views tend to polarize opponents and the supporters alike.

But I believe, She has the intelligence and the intellect to be the President. She made history by becoming a Senator as the first lady, Now I hope she becomes the first women President of USA.

We don't know who will finally get the Republican ticket, but wouldn't it be great if Condoleezza Rice and Hillary Clinton fight it out in the 2008 Presidential elections? It would be record of sorts.

Regardless, Dear Mrs. Clinton, I wish you the very best in this grueling race and hope you make it through the democratic preliminaries and eventually become the next President. You have my vote.
Posted by Ram Viswanathan at Saturday, January 20, 2007

Email ThisBlogThis!Share to TwitterShare to FacebookShare to Pinterest
Labels: US