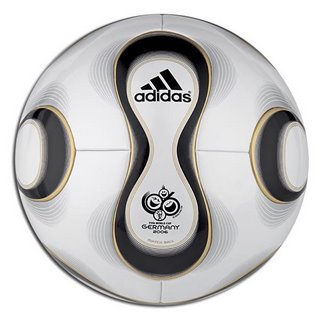 And it is supposed to aid in more world cup goals..

Yes, If you go by what Adidas has to say +Teamgeist. The official match ball supplier for world cup since 1970, Adidas says this new ball will yield more goals this world cup. Unlike the earlier world cup ball Fevernova, this new ball has fewer outside panels which are glued instead of the traditional hand stitching.

According to Adidas, because of the lesser panels and thermal bonding, +Teamgeist reacts three times more accurately when kicked.

The 32 pentagonal and hexagonal panels are gone, replaced by a free-flowing set of 14 panels, dubbed propellers and turbines. Unlike on earlier balls, which were hand-stitched, these panels are glued Â— or rather thermally bonded, to use the Buck Rogers-like term favored by Adidas.

By reducing the number of places where panels touch each other, the ball reacts three times more accurately when kicked, according to Adidas, which tested the ball by having a robotic kicking machine whack it against a wall a few thousand times. (NYTimes.com)

Adidas is hoping to sell over 15 million +Teamgeistt world over and is gearing up its supply chain to meet the expected spurt in demand.

FIFA 2006 is set to start in less than 48 hours and can't wait to see this ball in action. Generally, the games are interesting if there are more goals.


Interestingly, two most populous nations, & are not qualified and are not in the fray. But several smaller countries and relatively new entrants like are in the fray. In US, football means a different popular sport altogether and what others call us football, US knows it as Soccer.

My crystal ball says, the champions will be Brazil again.. What say you?
Posted by Ram Viswanathan at Thursday, June 08, 2006