AR Rahman Scores For Inside Man 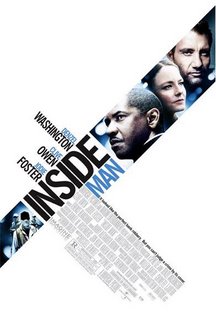 Saw the Hollywood flick Inside Man recently and was mildly surprised to hear AR Rahman's score duirng the opening and closing. There is absolutely no connection between the song 'Chaiya chaiya' from Dil Se and the movie but Spike Lee liked it and decided to use in his film. This what he said to the Empire Magazine

What about the music sequence at the beginning and at the end of the movie? Why that choice?
Well here’s the great thing about New York and all types of music. I’m a professor at New York University’s graduate film school; I’ve been a professor for the last eight years. One class we were talking about musicals, and one of my students suggested I see some Bollywood. I knew about it but I had never seen a Bollywood film. So I said, “Name one!” She said, “Dil Se.” Next class she gave me the DVD, I liked the movie very much. That song, ‘Changa Changa’, is in Dil Se. So, I made a promise with myself that one day I’d like to use it –so one day we did a song with Terence Blanchard, our composer, then we got MC Punjabi to do the rap, so that’s how that happened.

The movie starts from the original Dil Se song and ends with a remix version of the same song. I enjoyed it even though it was absolutely out of place. That's perhaps the attraction to it I guess.