Went for a run by the beautiful Yarra river which runs through Melbourne. Took some photos along the way and here are a few of them: Running track runs along the brimming Yarra river for miles on end without interruption. Melbourne is getting ready for the Commonwealth Games (March third week)and these fishes are part of that. These were lined for a mile leading to Melbourne Cricket Grounds (MCG), the venue of the opening ceremony. Want tickets for the Commonwealth Games 2006? Trams of everywhere and are easy to use. Just one ticket for train, tram or bus. 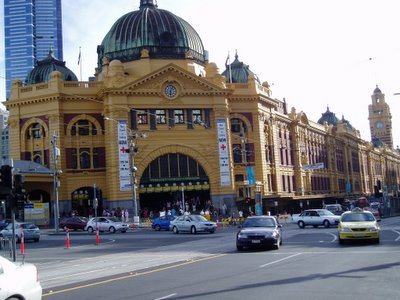 Flinders Street Station is a busy station connecting downtown or Central Business District (CBD) to its residential suburbs. I heard that original plans of the Flinders Street Station were actually designed for the VT central station (now Chathrapathi Shivaji Terminus) of Mumbai, but were mixed up in the London office (during the British days) and sent to Australia instead.