At the end of our strenuous week in Australia, we had some time to kill in Melbourne, so we decided to go and see penguin parade. This unique parade happens around dusk time every day in Philip island which is about 150 KMS from Melbourne downtown. Our local office colleagues also spoke highly of this 'must see' parade and increased our curiosity. 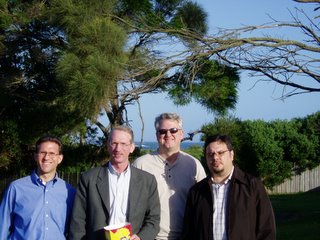 While others were staying overnight, I was to depart by a red-eye flight the same day around 00:50 hours that night. We were told that the parade happens around 6:45 PM and would have enough time to return back. So, FIVE of us decide to rent a car head towards Philip Island to see this interesting parade. (It is another story that I got to drive the entire distance as others were from 'right side' driving country)

With the help of the hotel concierge, we rent a car in a hurry and commenced our road trip around 4:15 PM. Since we didn't know alternate routes, we plunge ourselves in to the 'back home' traffic. However, we did pick up speed once we got out of the Melbourne suburbs and reach Phillip Island around 7:00 PM.

We hurried to the ticket booth and one of us even bought the ticket. Then we saw the board that had information about the previous day's parade. The board proudly proclaimed that on 12/7/2005, a total of 1546 penguins participated in the parade at 8:55 PM. It took us a few minutes to dawn on us that we cannot view the parade and still make it back to the city in time for my flight.

We then attempted to make some alternate travel arrangements and called several tourist operators but weren't successful. Phillip Island is beautiful but is very desolate and the Penguin Parade is the only game in town. 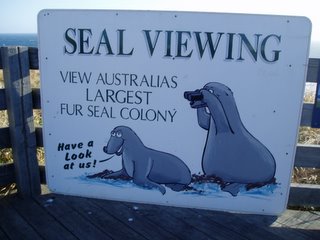 So, we took the next FIVE minutes to view Seagulls which were rather elusive and headed back to the city. Needless to say, we made it back in time for my SQ flight to Singapore.

So, FIVE men drove for FIVE hours for FIVE minutes of sight seeing.

I remember doing something very similar about 15 years back in US. At that time, I was in Columbus, Ohio and Six of us drove for TWELVE hours to see SIXTY minutes of Niagara Falls.

More pictures in my picture blog
Posted by Ram Viswanathan at Wednesday, December 14, 2005