I was in Taipei for a week about 10 days back.. This was my first trip to Taipei after starting to blog. Some notes from limited stay there:

People
One thing that stuck me the most was the punctuality. I interacted with a cross section of people and they all were 'on-time' and expected us to be as well. Numerous taxis I engaged, my office colleagues all kept time. The conferences and press briefings I participated all started on time. In fact, one of my colleagues called to apologize in advance that she will be delayed by 10 minutes. I was simply bowled over..

Another as aspect that made me take notice was the politeness. Everyone, I interacted with were polite and courteous. But, beneath the politeness, I also experienced certain degree of shrewdness and attention to detail.

Infrastructure
Taipei is perhaps one of the most connected city in this part of the world. WiFi seems to be everywhere and in some parts of the city, it is FREE to Taiwanese citizens.

Taipei is the capital and the largest city in Taiwan. More than 12 million people call it home. Like all major cities of the world, there is perennial traffic congestion. But the infrastructure seems be to well developed and the traffic disciplined to handle the load.

Travel
Taipei has a good network of underground train system. But I was quite confused with the station names which were mostly in Chinese. I had to read the names several times to get it correctly and even then, I got off at the wrong station a couple of times. 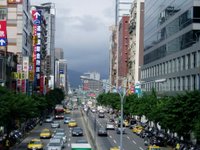 axis are ubiquitous and ply by meter, however language might be an issue. It is advisable to have the Chinese names of your destination available while engaging the Taxis. (It was interesting to note that, the Chinese names vary from the English ones. I tried to engage a Taxi to go ShangriLa Hotel, but the driver didn't know the Hotel, which seem to be popular. After 15 minutes of search, I found some help. She spoke to the same taxi driver and gave the name of hotel in Chinese, which sounded very different from English pronunciation). 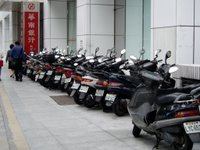 Lots of two wheelers but only Scooters. I hardly saw any motor cycle during my stay. Helmets are compulsory for both the riders and the people seem to be following the rule.

Two wheelers are not allowed to make LEFT turns (Taiwanense drive on the right side of the road). They either go straight and turn around and make a right turn or merge with the traffic on the right side and proceed straight.


Food:
Like most of the Chinese cities, Taipei is not Vegetarian friendly. Language issues compounded with general lack of appreciation for vegetarian makes it difficult to find restaurants that serve vegetarian food. My Chinese colleagues made sure I got something to eat.

In these situations, my plan B is find a grocery stores that sell fruits & pre-cut salads. Unlike, US, the grocery stores are not 24X7, so some planning is required. 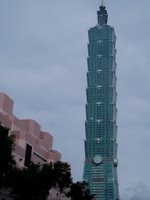 Taipei 101 is a must see. It is presently the tallest tower in the world and the pride of Taipei. Not to be out done, Shanghai & Dubai are building even taller ones. While, North American cities have long dropped out of the race, Asian cities seems to be racing after the title.


Security
No issues on this front. I walked around quite a bit and the city seems to safe.

More on Taipei and some pictures in my photo blog (tomorrow).