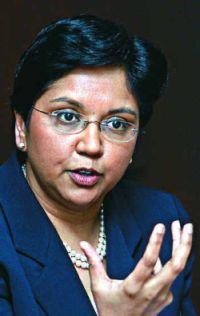 I read an interesting article in business line that talked about the power of blogs and the need to react fast to what’s been said or written about organizations (and individuals). What raised my curiosity was the fact that this article talked about Indra Nooyi, President & CFO of PepsiCo, who is originally from Chennai. So, I started digging around to get more juice on the purported speech of Indira Nooyi that landed her in trouble.

Ms. Nooyi delivered a commencement speech to the graduating class of 2005 at the Columbia University Business School on in . In her speech, she compared the 5 continents (excluding Australia & Antarctica) to the five fingers of our hand and went on to say that US (and not ) is like the middle finger. She also talked about how US is perceived by the rest of the world as giving its middle finger rather than a helping hand.

This speech created a storm of posts in the Blogosphere and most of them were highly critical. When I Googled on this subject, it brought over 15,000 links. To quote from just one of the post “That's bull. If the rest of the world chooses not to see for what it truly is, the fault is not with us.” In other words, the problem is with the rest of the world, according to this blogger.

I read the whole text of her address. While I understand the crux of the overall message, I do wish she had used a different analogy to drive home the message. It may be that she wanted to be provocative, but it sorely misfired on her. Ms. Nooyi acknowledged as much in her apology statement when she says “Over the years I’ve witnessed and advised others how a thoughtless gesture or comment can hurt good, caring people. Regrettably, I’ve proven my own point. Please accept my sincere apologies.”

In her speech and the subsequent statement and apology, she went out of her way to state her loyalty and love for . Why do you think she did that? Is it because she is a first generation immigrant and happens to be brown in color?

Here are my questions: