'Stuff of the Legends'

Who is the legend in this photo? 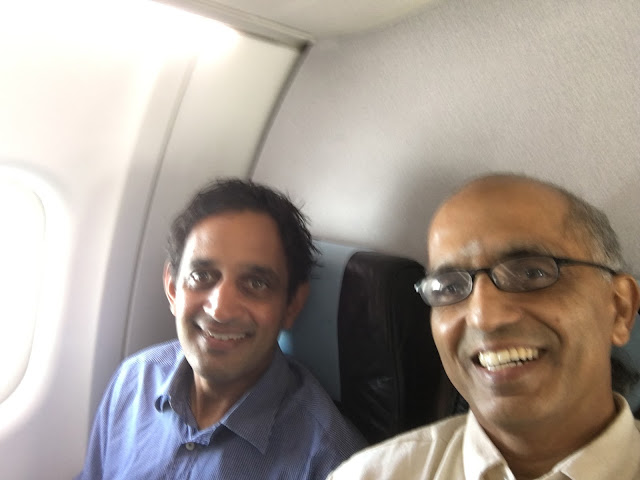 So, I bumped into this guy in my routine Bengaluru flight.  I generally dose off during this puddle jumper to makeup for waking up early.  But this time I somehow struck a conversation with my neighbor and that made the generally monotonous one hour flight interesting.

Guy next seat mentioned that he has seen me in some runs and boy I started yalking away about my running 'exploits'.  As I was reeling off my running stories, I too remembered seeing him somewhere.  So, I asked him..

"I have seen you somewhere too.. Was there a story about you in The Hindu?"

"Yes".. He said coolly and politely.  What I discovered later about him, squarely shut my mouth.. :-)

He turned out to be Sridhar Venkatesh who is perhaps the only 'Indian' to have participated in Marathon De Sables, the gruelling six day, self sustained 250k trek across Sahara.  I asked him how did he train for it in Chennai?

Sridhar said, he got an online coach and ran a minimum of 10K per day and a marathon every weekend (with a backpack) for the Sahara adventure.  He also learned the value taking 'salt tablets', which according to him is very useful in the long runs.

Marathon De Sables is definitely stuff of the legends and I am glad I got to meet one.

So, now you know who is the legend in this photo.. A big bow to you Sridhar.  You have inspired me to 'dust off' Comrades from my bucket list.
Posted by Ram Viswanathan at Saturday, October 29, 2016