Another Chapter in Chennai Running

Chennai's running culture is still nascent, but growing at a steady pace.  There are more runners and more running events happening in Chennai than ever before.  All this augurs well for the Chennai brand and the wellness of its citizen.

Thanks to Neville Billimoria, Chennai running took another significant step in the form of Dusk 2 Dawn(D2D) running event.  First ever organized running event in the night.  This signifies not only the growth of running movement in the city but also 'growth' in understanding of the city administrators as well.  I couldn't imagine pulling off an event like this even just a couple of years back.

A night running event requires certain level maturity and cooperation from all stakeholders.  The success of D2D proves beyond doubt that Chennai has what it takes to pull of a night running event and there by writing the next chapter in the Chennai running history.
According to the organizers, over 7000 participated (with significant # women runners) in an event that started at 10:00 PM and ended in the wee hours of next day.  A night running event adds additional dimensions to the list organizers have to plan.  Kudos to the organizers for thinking through all that.  They did the right thing by limiting the running route to the 5k beach front and ensuring it was lit well.  City also pitched in and ensured road closures and good police presence all along the route.  In all, all stakeholders pitched in and ensure the success of the event.
A word about Neville here.  More than a runner, more than a cyclist, he is a wonderful human being.  Here is a first hand story.  Neville & I ran Colombo Marathon in 2011.  Around 32k mark, he sees a 'down' runner and stops to help her.  While attending a fallen runner, Neville was hit by a passing vehicle and gets hurt.  In the ensuing melee, an ambulance arrives but can take only one patient.  Ignoring his plight, Neville ensured the other injured runner gets the required medical attention and sends her off for further treatment in the only ambulance available.  Though hurt, he chugs till the finish area and then collapses.  I took him to a hospital in another ambulance and to make the long story short,  all ended well.  I am narrating this story only to illustrate the wonderful human being Neville is.  I am not at all surprised that the entire D2D proceeds are going for a noble cause.  We are enriched by our association with you Neville and wish you the very best in all your endeavours.. 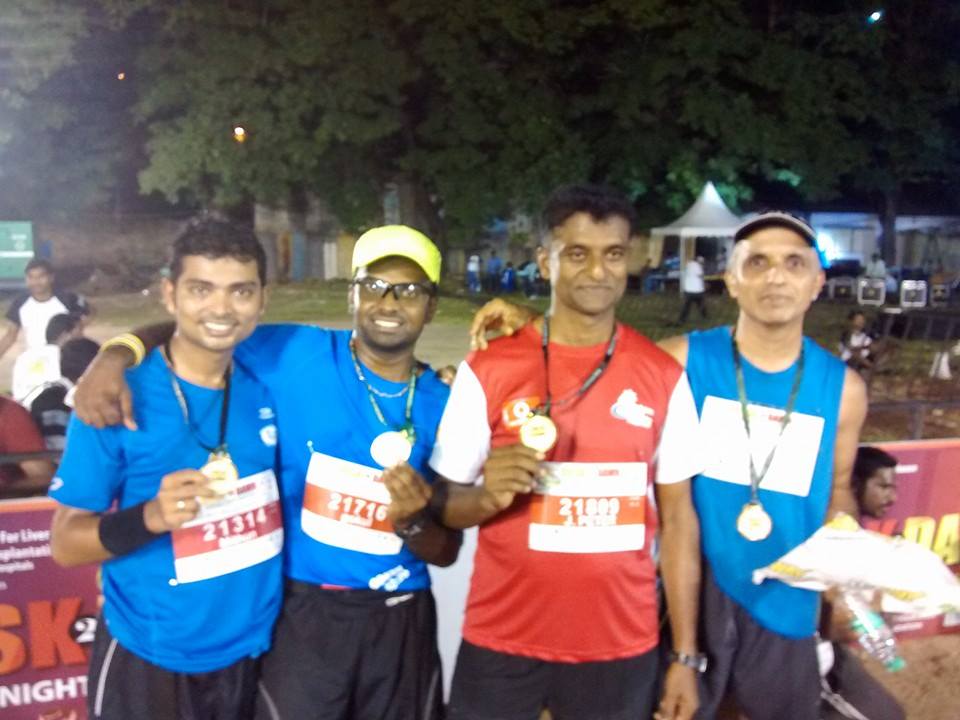 photo courtesy - Gokul Raja FB post
For once, I didn't take my camera for the run and there is a reason for that.  I was heading to the airport directly after the run and pretty much had packed everything.  But did get to be in this photo, thanks to Gokul.  (I ran the half in 2:08).  Thanks to Raghav, I got to the airport with time to spare and now sitting in the cold confines of a small scandinavian town writing this post.