Comrades - Where to eat in Durban?

Finding vegetarian food to your liking can be problem and can depend on where you stay as well.  In the last two occasions, I had stayed in a 'furnished' apartment that came with a kitchen.  All we had to do was to make a quick trip to the grocery store for bare essentials and weven brought some stuff from India.  This a better option and is gentle both on your wallet and stomach.

This time, I stayed in Hilton for convenience, which is close to the Expo as well as finish.  While it was good from that perspective, I got stuck on the food front.  There are simply no options if you discount the Hotel food.  On top of it, you are strongly discouraged from venturing outside after dark due to safety concerns.  So, you are basically confined to the Hotel.  The food at the Hotel is 'just passe' and to be expected wildly expensive. (breakfast alone would set you back by USD 20 per person).

Interestingly, the pasta party at Hilton happened on Friday night and not on Saturday as we had anticipated.  Shahid, Aravind and I trooped in on Saturday evening, looking for loads of pasta and ended up having to 'search' for carbs in the sumptuous non vegetarian buffet spread.

Sita did pack some MTR 'ready to eat' dubbas for me, and they helped somewhat.  But without a proper utensils and facility to heat, these ready to eat are to be used only as a last option.  In fact, I am 'enjoying' the Khara Bhath as I do this post.

Gotten tired of this food, I dragged Aravind out last evening for some Indian food.  Aravind was a reluctant starter, but he also needed some Indian fix, so he came along as well.  We did some googling and found that there is an Indian district less than 2 km from the hotel.  We went looking for the Indian district, named 'Victoria' market, drooling for some vegetarian food, preferably Indian.
It as quite an adventure... Read on 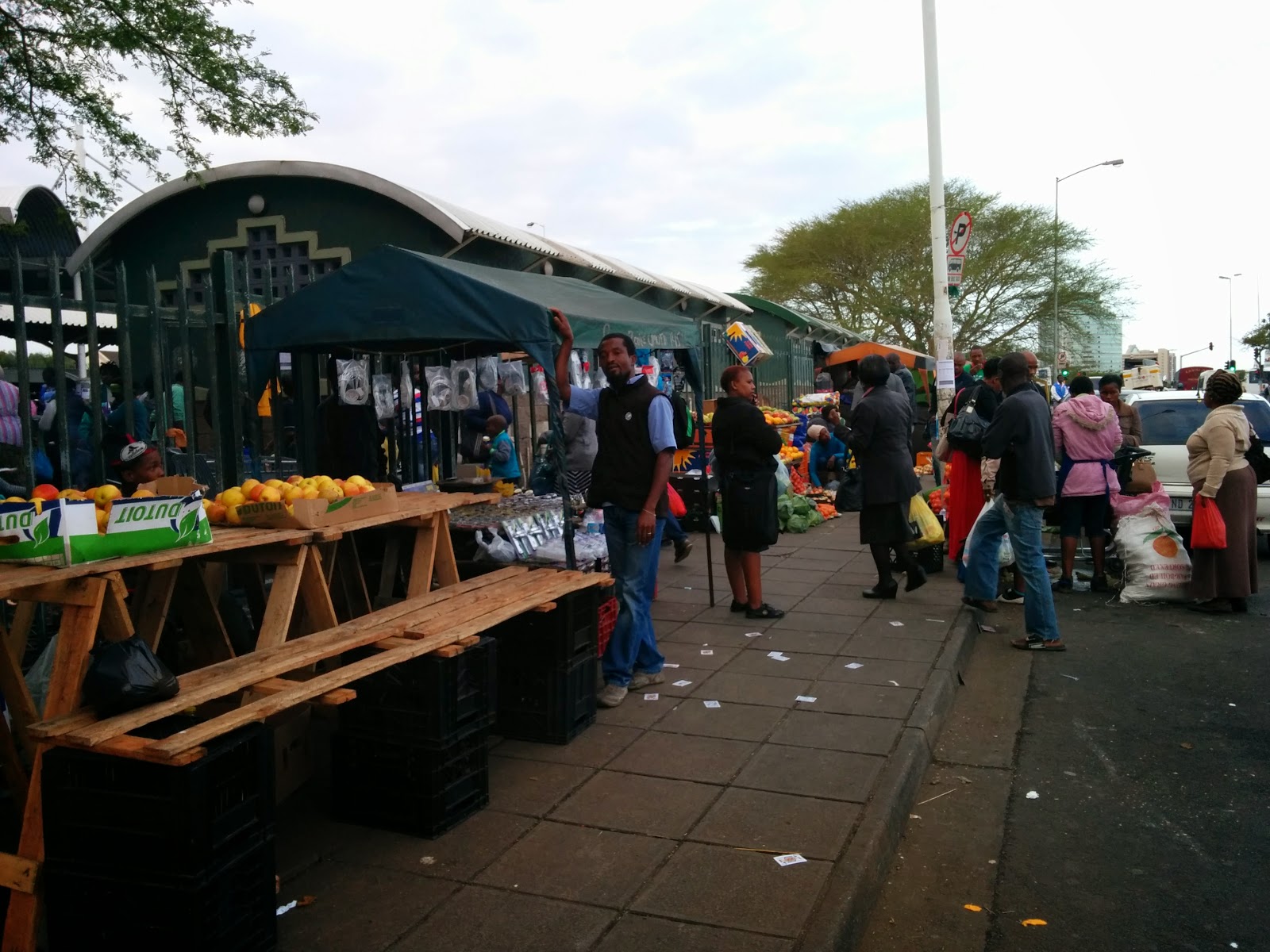 Two blocks west of the Hotel was a different world.  We were in the midst of a bustling local market.  From haircuts to vegetables to கையேந்தி பவன்s.. lot of stuff being sold to lots of people.  We tried to ask for directions, people either ignored us and couldn't point us to the place we wanted to go. 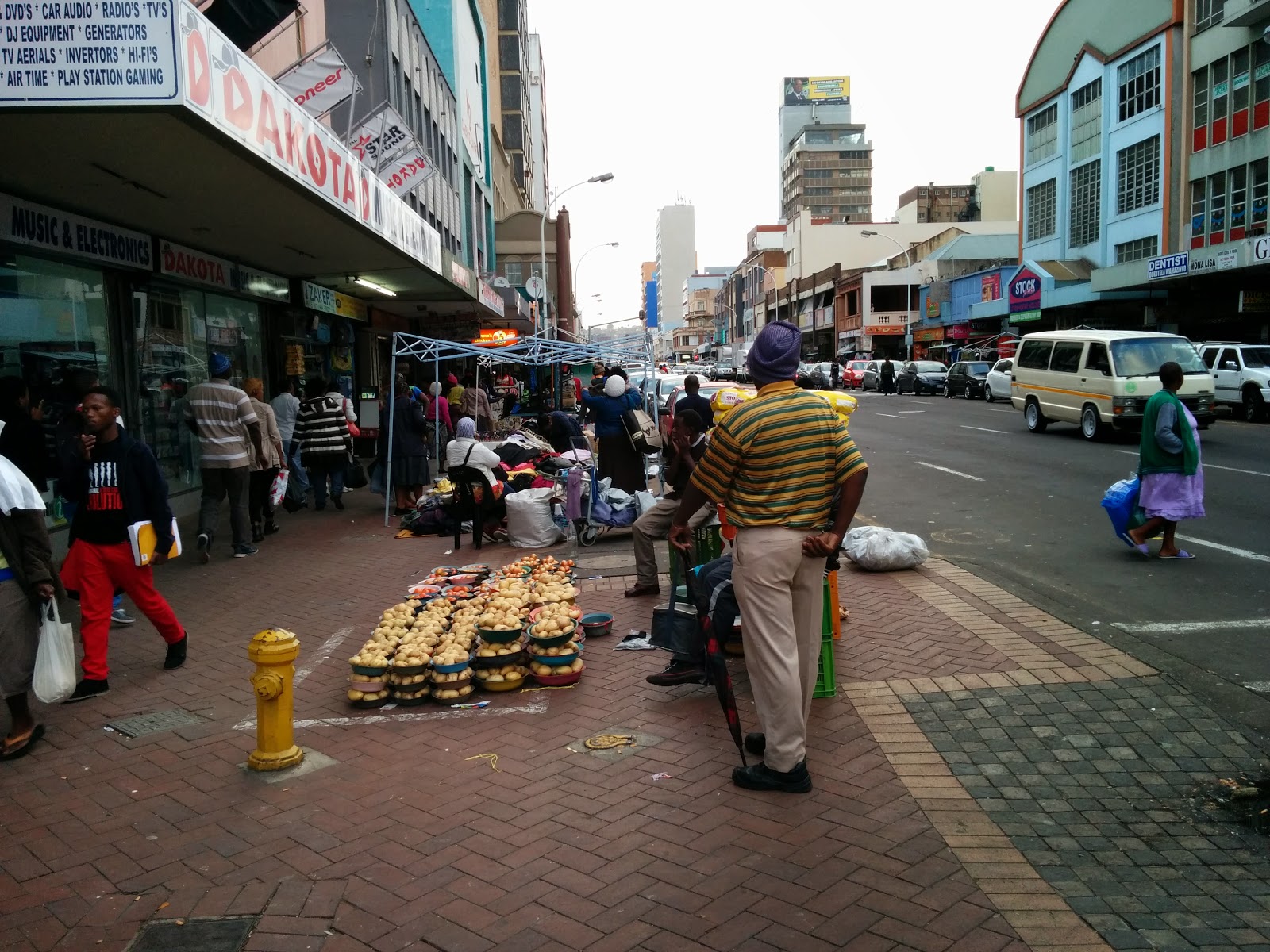 As we soaked in Ranganathan Street like atmosphere, we stumbled on what else, a Patel Store and the little girl there directed us to the Victoria market and later to a restaurant as well. 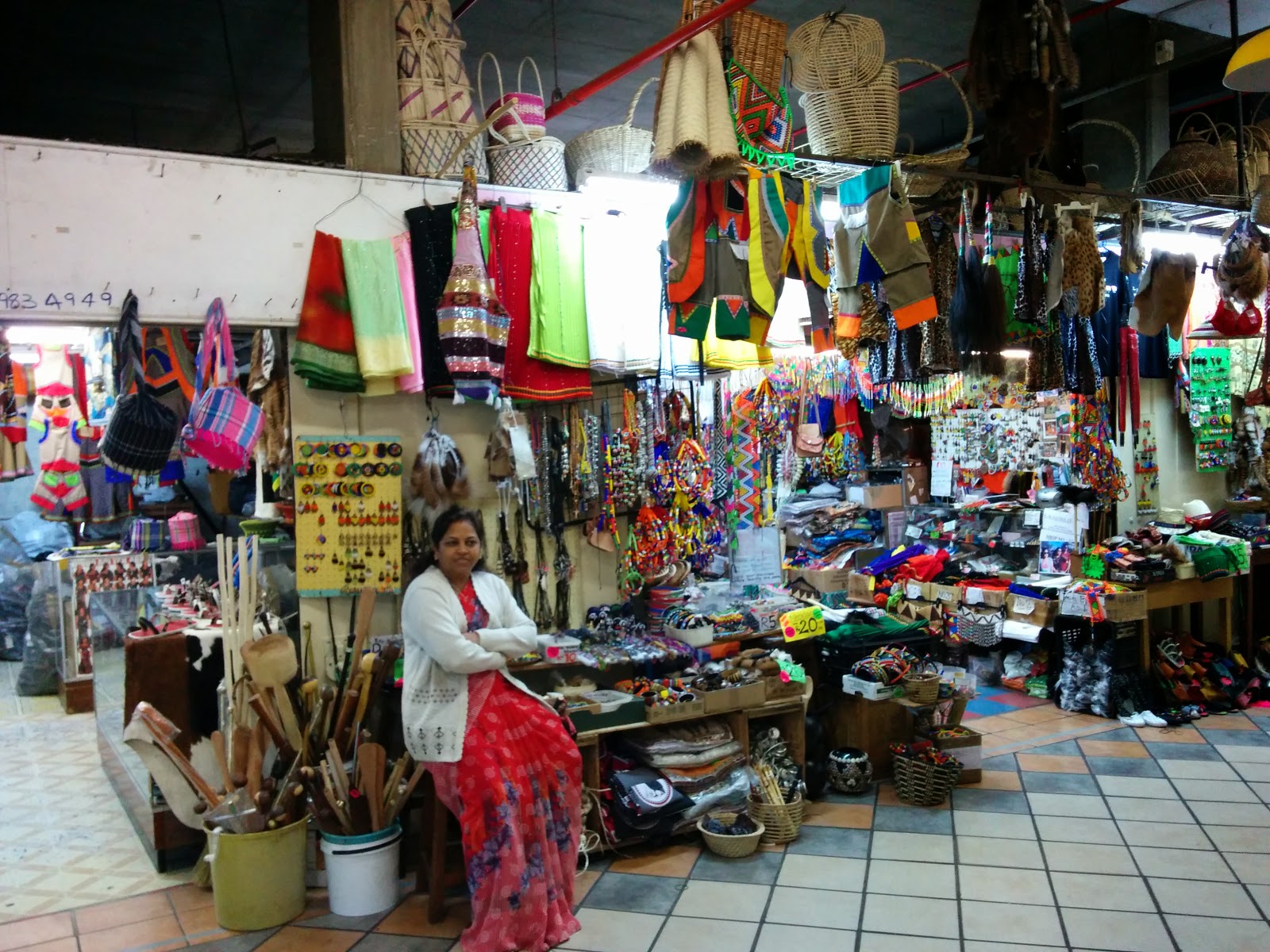 Victoria market was hawking lot of stuff from spices to ethnic wear but not Indian food.  Moreover, shops were shutting down.  Durban pretty much shuts down by 5:00 PM and no commercial activity after that.  So our search for Indian restaurant continued...

We came back to the Patel store and was more specific this time about food part.  We got the stock answer that shops close by 5:00 PM and there isn't any Indian restaurant close by.  But the girl who helped us first time came from nowhere and said there is one place we could go and directed us to Little Gujarat. 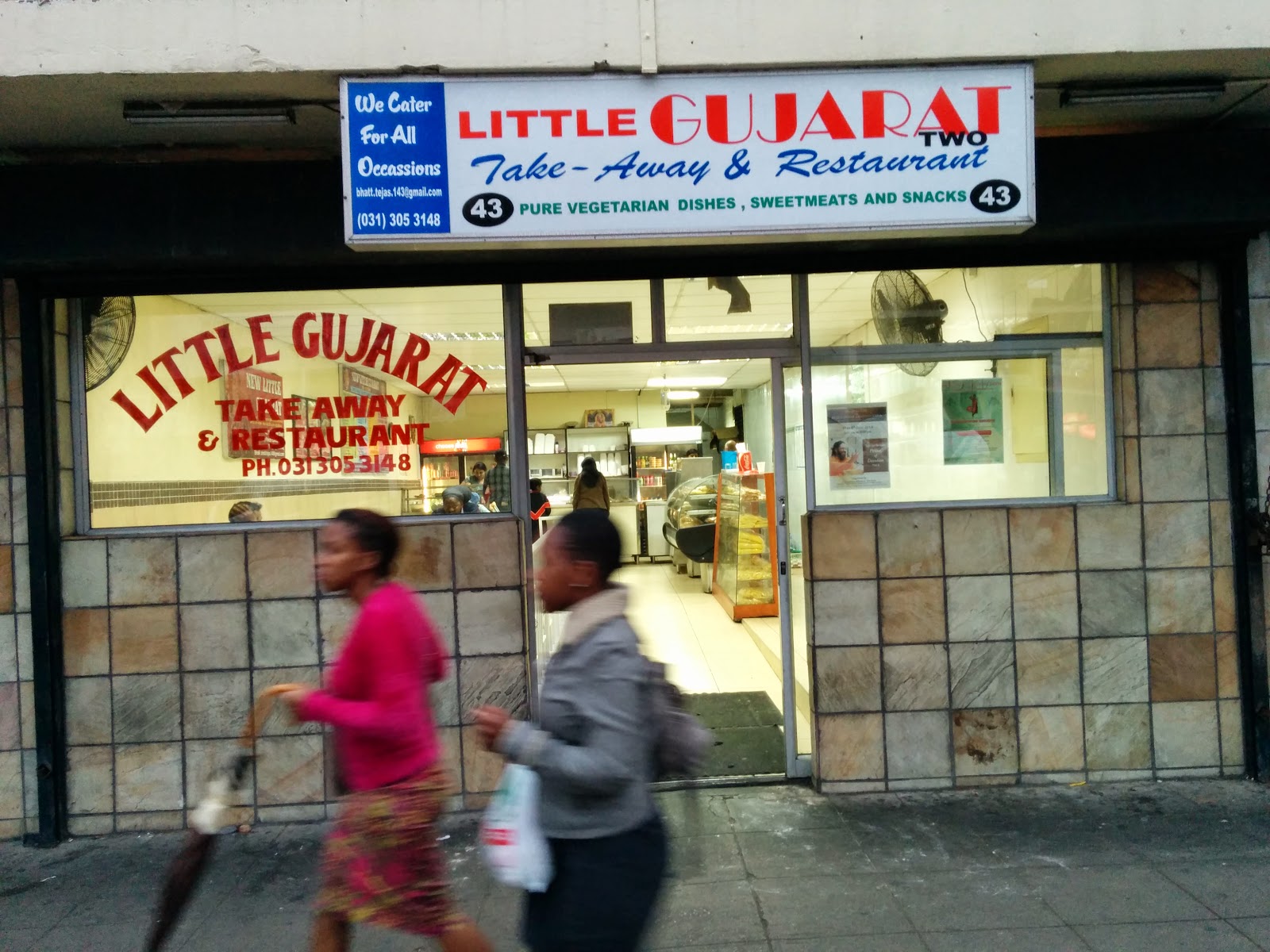 It was just one block from the Victoria market and closer to the Hotel as well.  It's a minimalistic setup, but good vegetarian food. 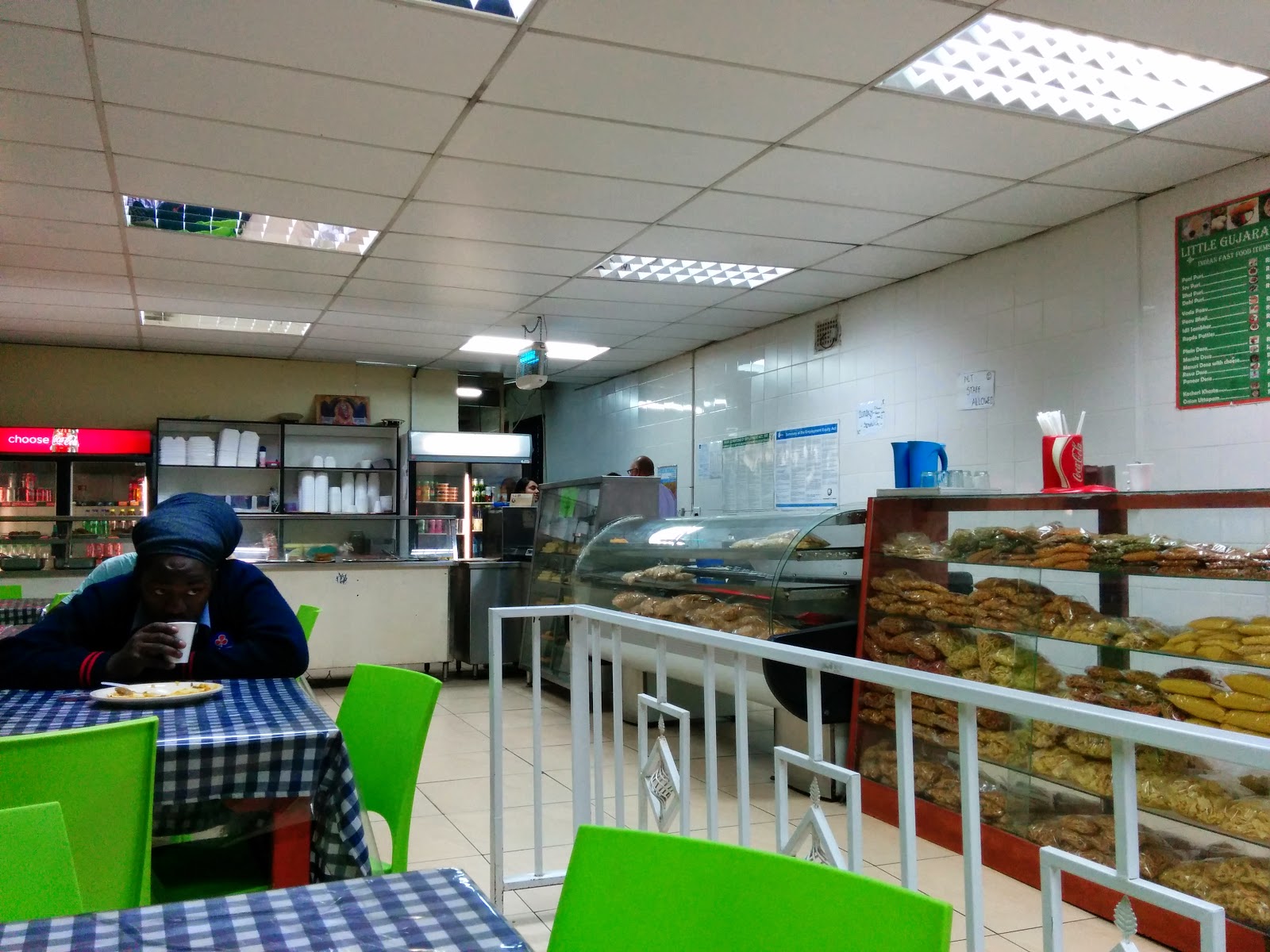 As Aravind and I indulged with a bhel puri, masala dosa, roti roll and coffee for just USD 7.  As we were hogging, the owner came by and started talking to us.  He is from Surat and has been here for 15 years.  He said the money is good here but the problem is one of security.  In fact, he cautioned us against walking back to the Hotel, though we could see it and is hardly a kilometer away.  He was worried so much that he took time from his business and dropped us in his car at Hotel.

One example of life after dark in the otherwise beautiful city.  Durban is blessed with pleasant weather, stunning hills and great people.  But it is also caught in the fear psychosis from which it needs to unshackle itself to grow for all people.
Posted by Ram Viswanathan at Tuesday, June 03, 2014