Marathon Diaries - 2014 Tokyo Marathon
After having gone to Tokyo just for this run, I could have almost missed the run due to a dead mobile phone.  But, before that, here is a story on the cleanest marathon I have run thus far.

Tokyo is a very congested city and there are lots and lots people hovering around.  It is one of the most 'dense' cities in the world and it must be producing lots and lots of garbage, but the city is amazingly clean.  And it carried to the way city carried out the marathon as well.  Though Aid stations used plenty of paper cups, pit stops were spotlessly clean.  Even at the start and finish where thousands of runners congregated, I was hard pressed to find any litter.  All of us could learn a lessor or two from the Japanese obsession for cleanliness.

This focus on garbage collection detail showed in all aspects of the run.  Organizers must have thought of everything and the to the runners' credit, they followed instructions in toto. 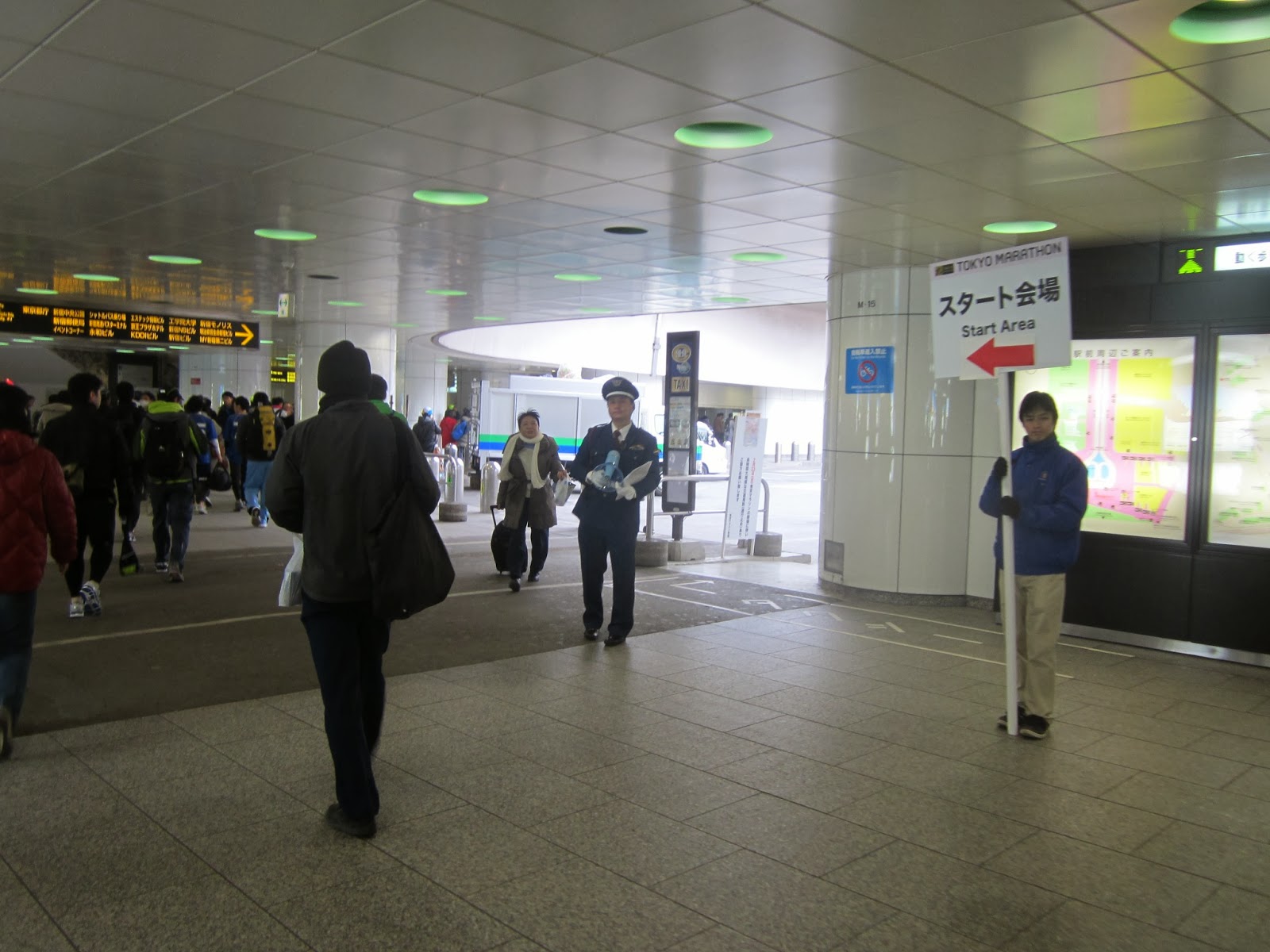 I was told the volunteer to runner ratio was 1:1 and it showed.  Just when I would want to look or ask for directions or had questions, there would be bi-lingual instructions and volunteers.  These guys and girls were polite, courteous and efficient.  The best way to get to the start point at Shinjuku was via trains and to get there, one would have to change multiple trains depending on where they were coming from.  In my case, I had to take two trains to get to Shinjuku and transfers were confusing and the busy stations were little overwhelming.  But to my surprise, volunteers were there in all stations to guide runners even for transfers.  This attention to detail showed in all aspects of runner experience that day. 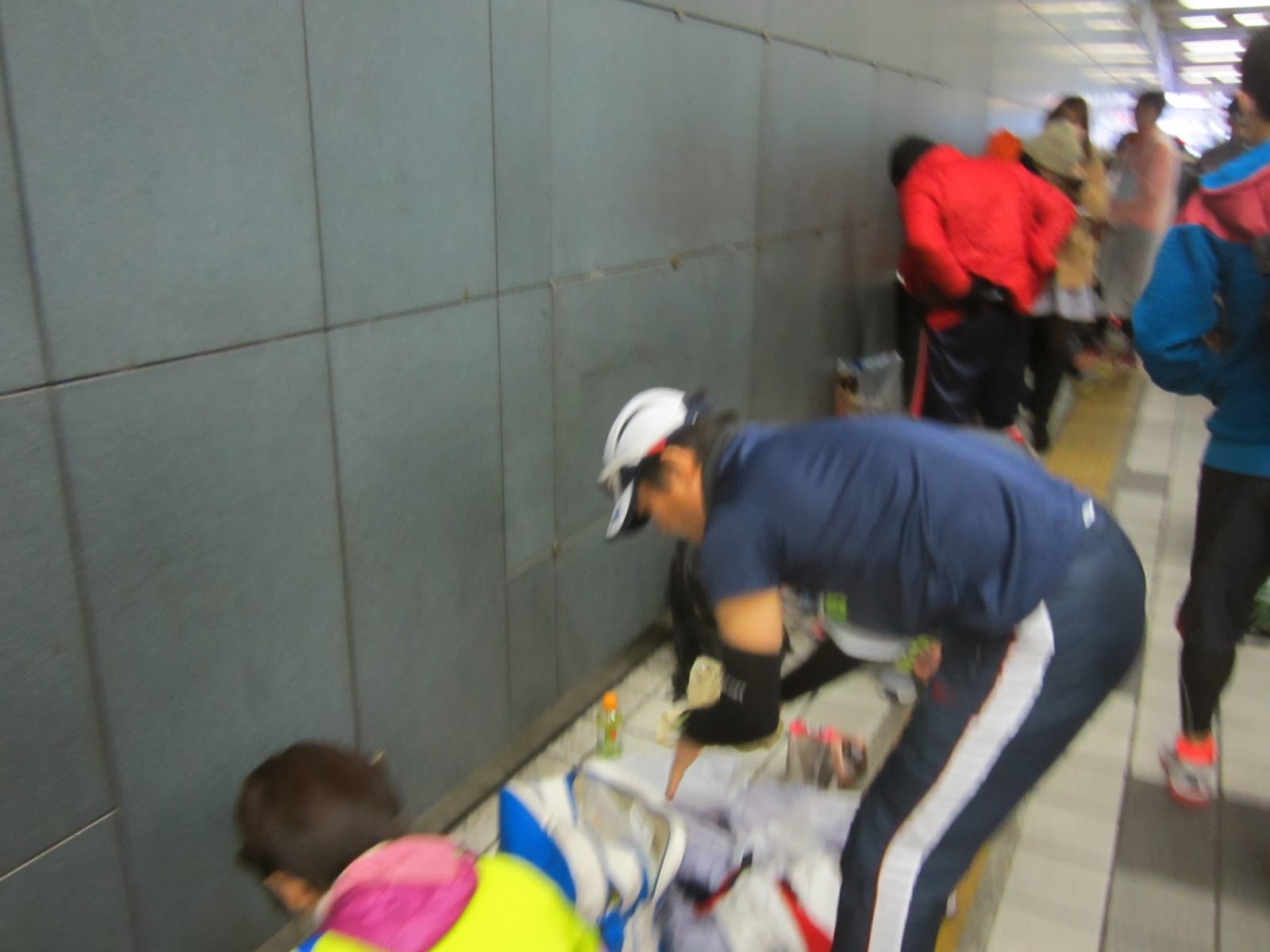 The day started out pretty cold on the race day.  It was around 2 C when I started from my hotel and that forced to us add couple of layers on top of our running gear.  All through the sprawling Shinjuku station, runners moved to the side to shed additional layers and got ready. 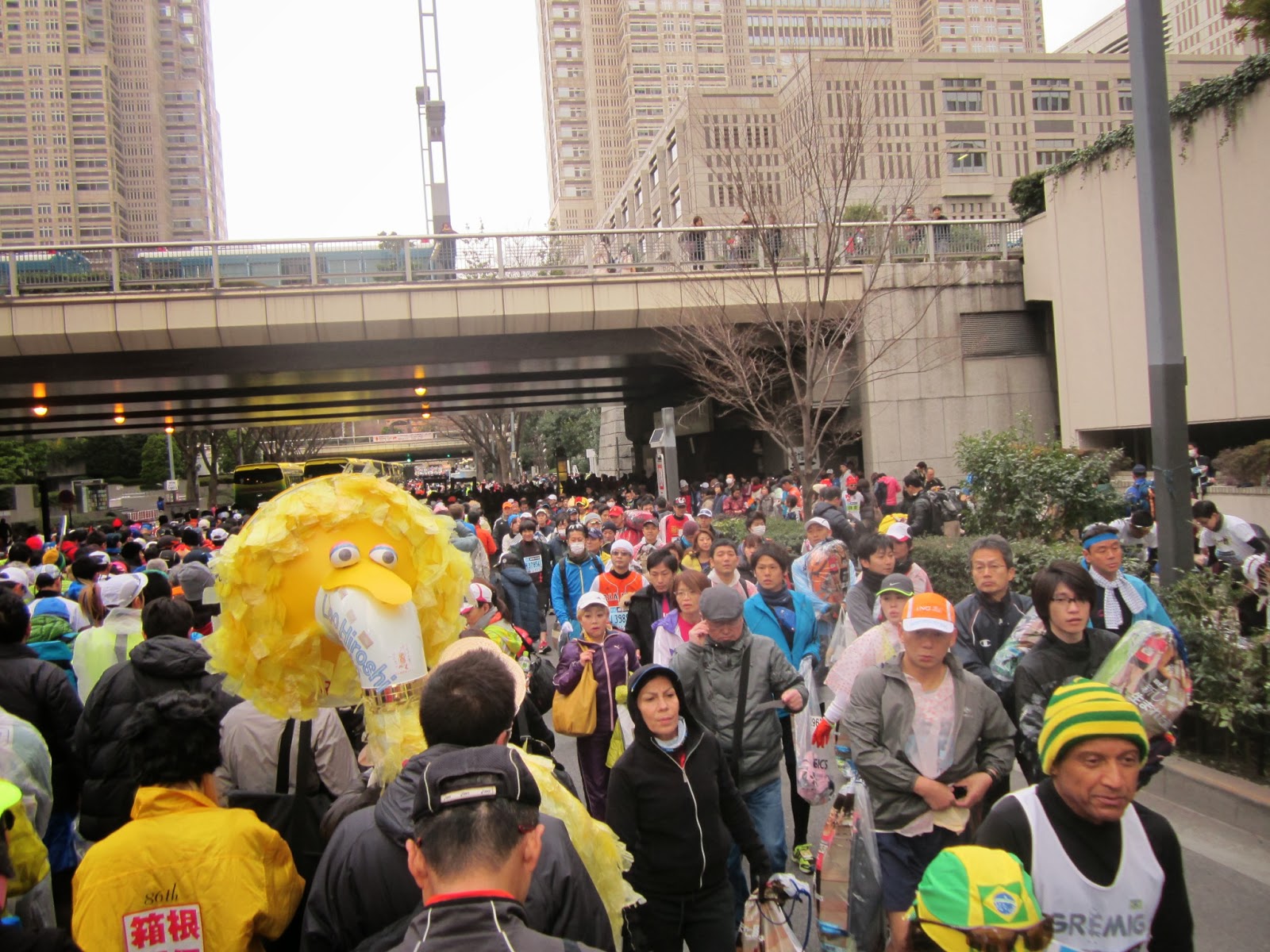 This is one area where the organizers need to go back to the drawing board.  As thousands of runners spilled out of the Shinjuku station, they were asked to go through security check before reaching the baggage drop and start area.  Given the Boston bombing, that was a good idea but there were woefully inadequate number of security points and metal detectors to screen all runners in a short span of time.  This resulted in massive pileup and runners jostling to get past the security point.  Other than this minor irritant, everything was perfect. 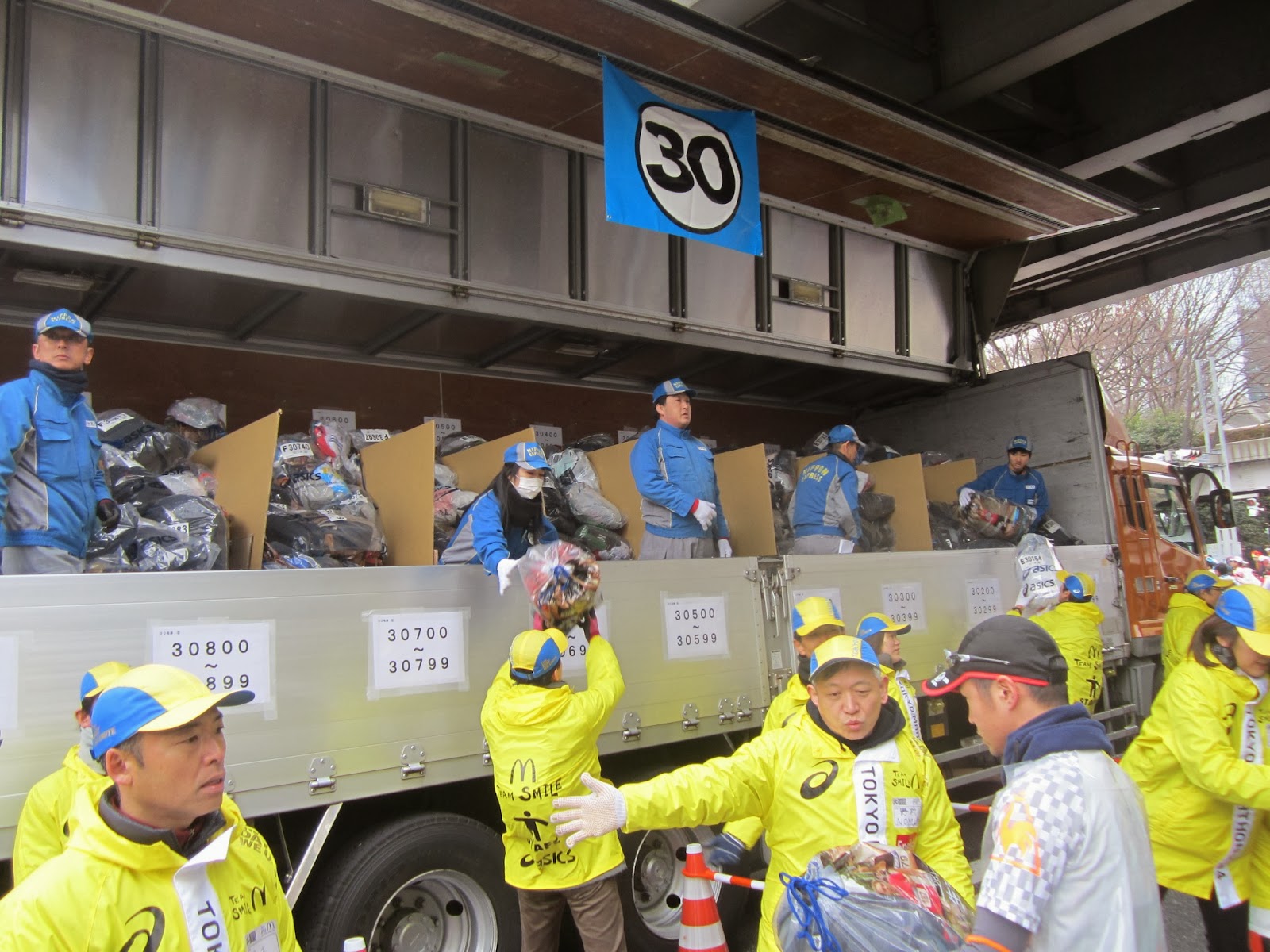 For every thousand runners, there was a massive truck waiting collect bags.  These were then transported to the finish area and neatly arranged for pickup. 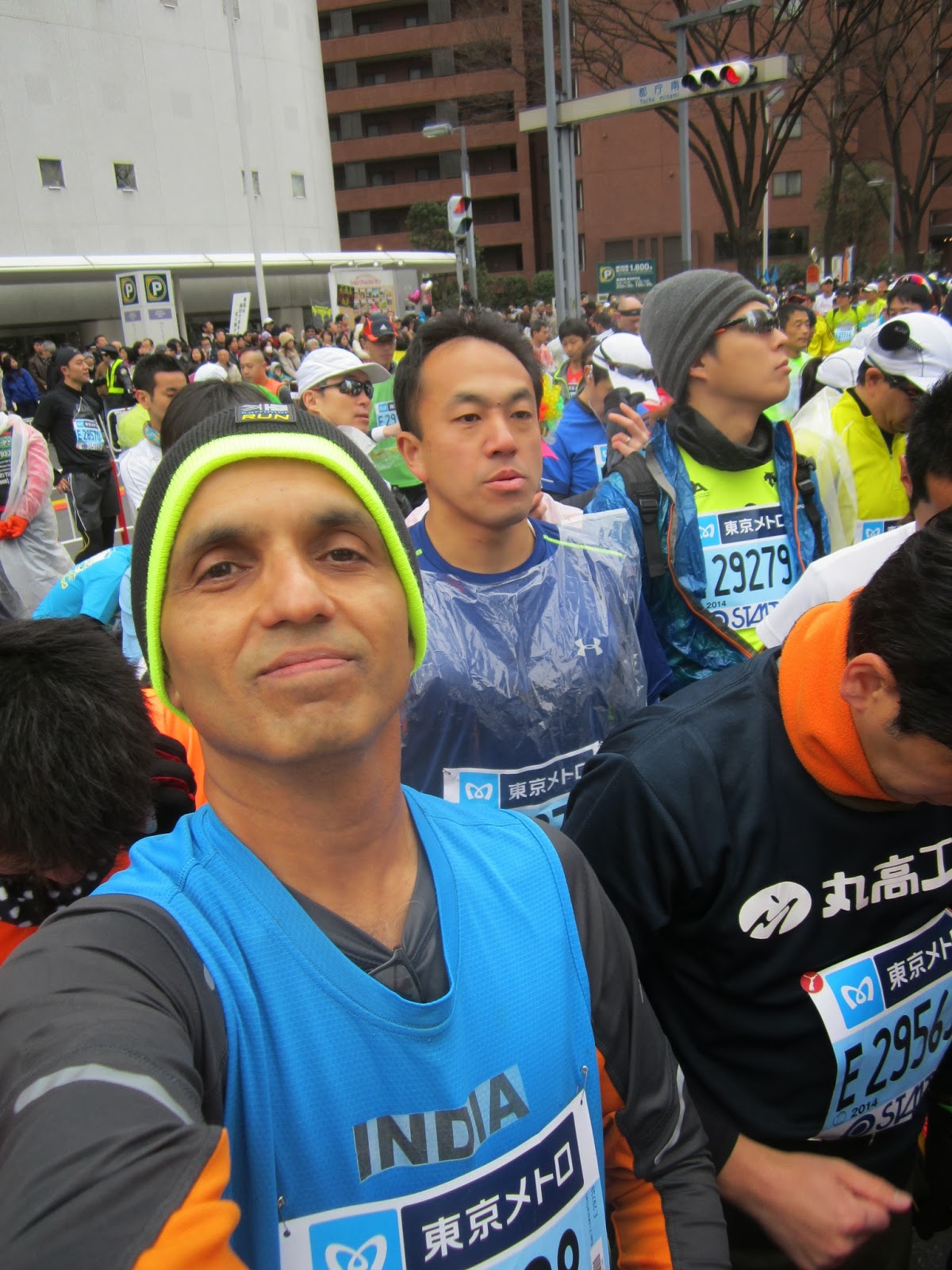 A selfie at the start.  I was without my two favorite accessories.  I had left my sunglass back in India and dead mobile phone deprived me of music. 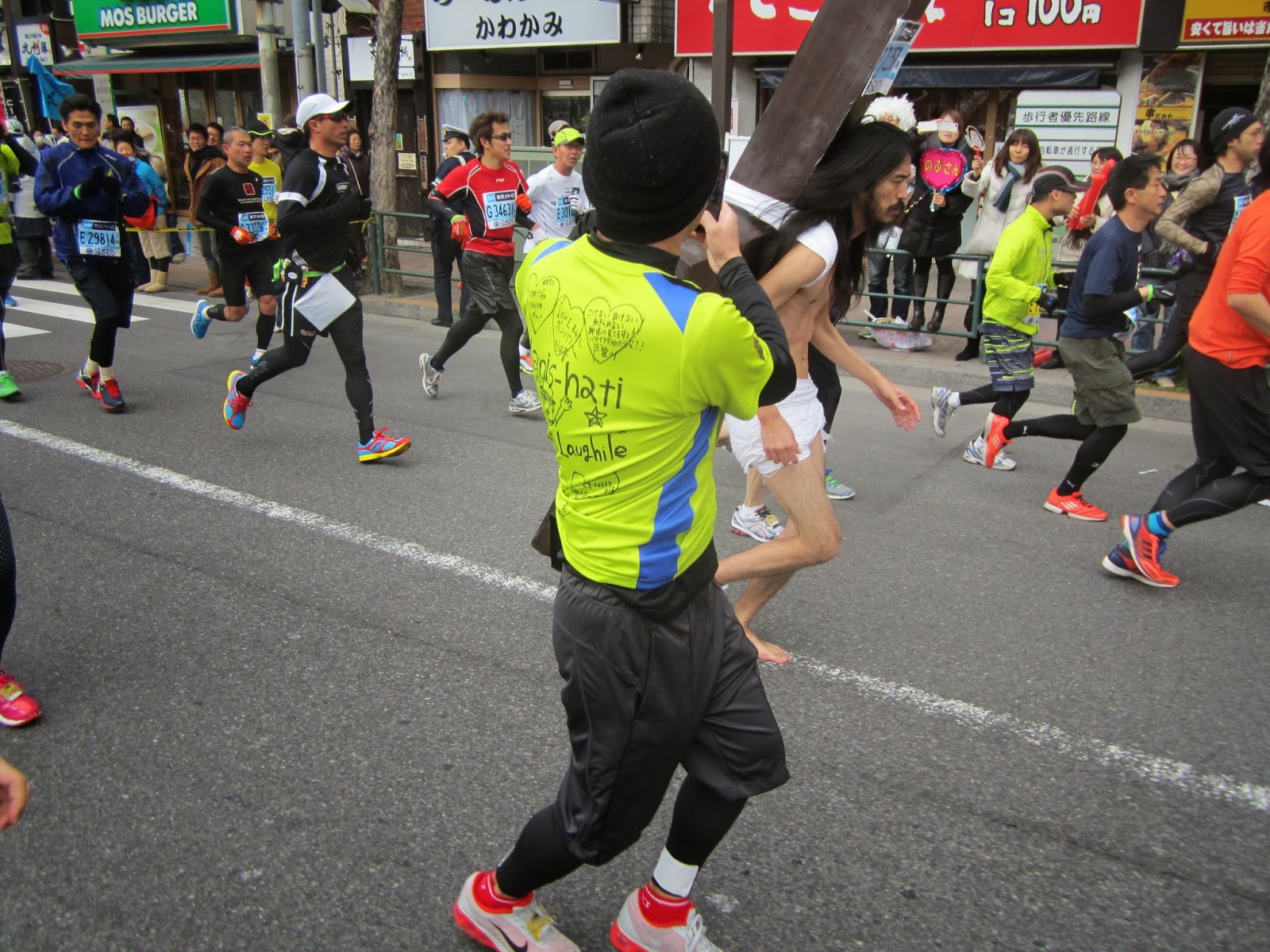 This runner dressed as Christ was running with a huge cross tied to his back.  He was ahead of me when I crossed him near halfway mark and he finished not very long after me.  I could only hazard guess as to how heavy that cross would have been.  Even if it was 'light', to see that guy lugging the cross along finish around 4:20 left me 'awed' at his grit and strength. 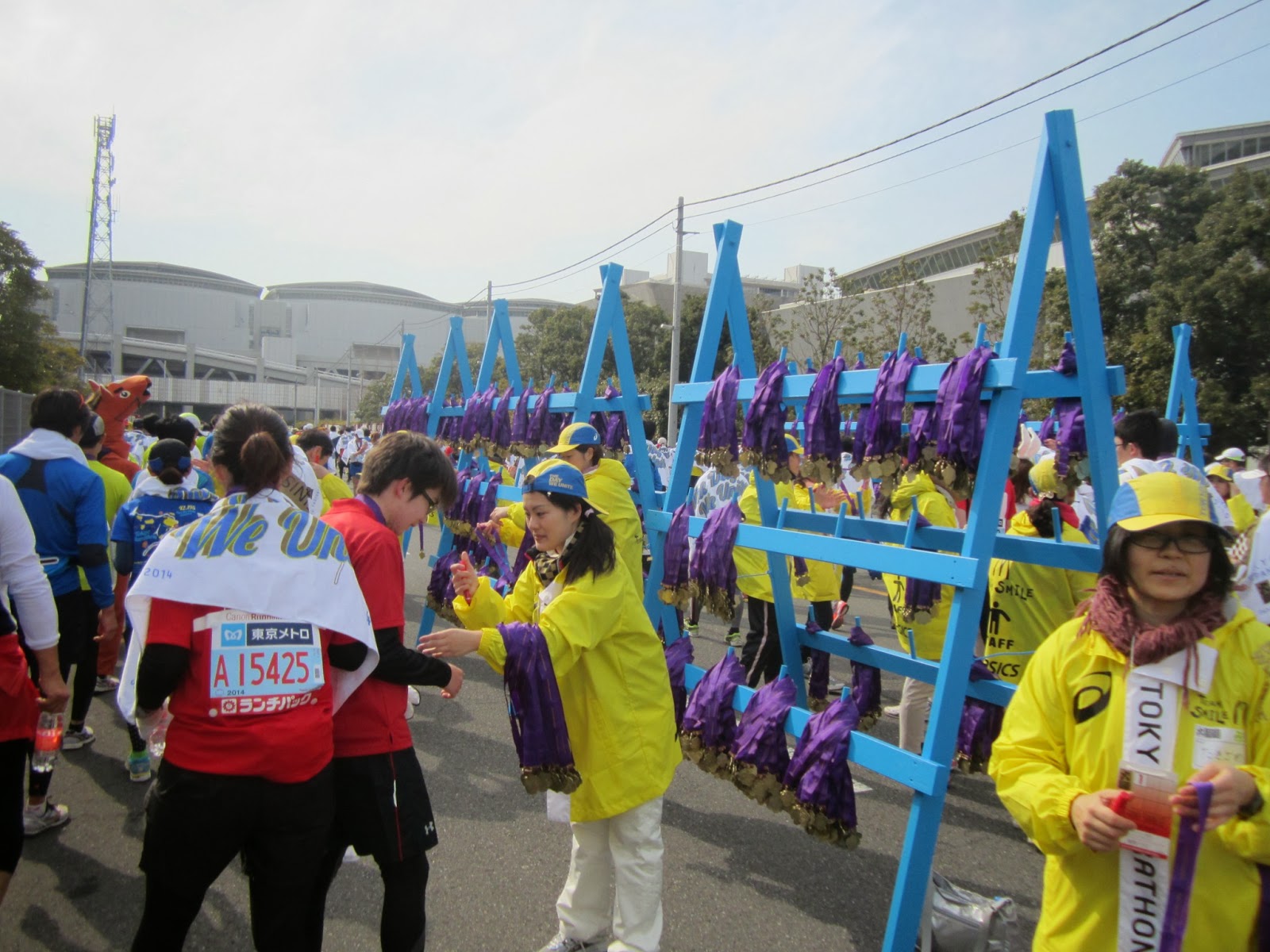 At the finish line, we had to walk for about a half a kilometer before getting to the baggage claim area.  As we were walking, we were first given our medals and then the a bag.  As we moved further along, we could pick up energy bar, water, orange, banana, Apple and Tomato.  (Yes, Tomato).  The key point being mostly natural refreshment.  I also liked the finisher towel they wrapped around us.  It gave us some protection from cold and became a souvenir later.

Going into the run, I wasn't very sure how my left leg would hold given my PF history.  But surprisingly, even in (or due to) Vibrams five fingers, PF was at bay and had good finish.  At one point, I was shooting for under 4 but few bridges after 35k killed it.  So, what's the secret here?  I think it is my cadence that helped.  As I looked through my Garmin data, I see that my cadence was consistently hovering around 180 and that perhaps helped to keep PF at bay.  Regardless, I have some more work to do on my gait before Comrades.

With this, Marathon # 48 - Done
Also 5 of the 6 World Marathon Majors - Done
Name - Tokyo Marathon (Unlike other major marathon, Tokyo did not have any 'title' sponsor)
Where - Tokyo city
When - Feb 23, 2014
Kind - City Marathon, through important landmarks
One the best organized marathons I have run thus far.  Clean, orderly and attention to detail. Recommend highly.

Rest of the Stroy - Are you still wondering what's the story with my dead phone?  Here it comes...

Prior evening, I spent almost couple of hours preparing a endless playlist of my favorite songs in my mobile phone for the race.  After that long and arduous process, I simply left the phone on the table and forgot to plug it in.  Needless to say, battery drained fast, leaving the phone dead.

I generally don't call frontdesk for wake up calls and this day wouldn't have been any different.  But as providence would have it, reception called me the previous night when I was fiddling with my music playlist and 'insisted' on helping me.  Without realizing, I had asked reception lady for a wakeup call and that saved me.  If I had relied only on my mobile phone alarm, I would probably overslept and missed the run.  Now you have the rest of the story gentlemen and women.  A lesson for me is to have a backup alarm for important days, otherwise, they will become a day to remember for all wrong reasons.

As of now, my next marathon is Comrades which is also my unfinished business for 2 years in a row.  I am hoping third time would be my lucky charm.  To get ready for Comrades, a bunch of runners are heading to Yercaud for a 62k run this Sunday (March 16, 2014).  First 36 is uphill and the rest downhill.

Will do a post on that when we come back.  Until then Adios, Amigos.
Posted by Ram Viswanathan at Friday, March 14, 2014