How not to clean fuel belt bottles 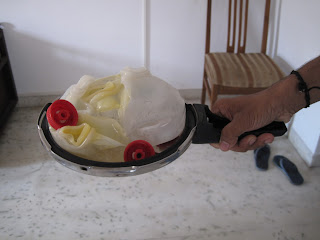 They say humans collectively, don't learn from their past mistakes.. I certainly haven't learn't the lesson from Senthilanand's mishap with trying cleansing the fuelbelt water bottles with rice cooker.   My water bottles met with the same fate yesterday.

I tried to clean / sterilize my fuel belt water bottles on a regular basis by putting them in the rice cooker.  Yesterday also, I tried to do the same thing with disastrous result.  Despite Sita's warning against putting the 'weight', I did exactly that to better wash the water bottles. I did turn the off cooker after 5 sounds, but that was enough for the bottles to melt, disfigure and cling to the cooker lid.  The only solace in the whole thing is that the water bottle caps survived.  Now I have four spare ones..

So Here is what not to do: