Watch it.. If you haven't done so already..

Lot has been written about this movie, so I will be brief.

Rang De Basanti is about 5 carefree wayward youths and how their lives suddenly change with the demise of their friend. The first half of the movie flows smoothly but becomes serious and very filmy in the later half. There is ample dosage of patriotism and culture stuff in the movie, but unlike Swades, the message is very subtle and has been woven in to the story line and devoid of usual Bollywood jingoism. 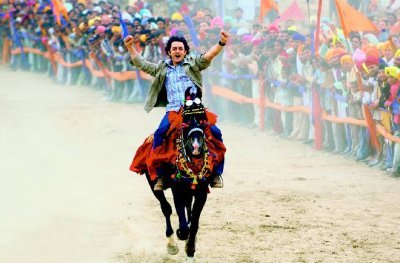 This scene did not make it to the movie due some issue with the Animal's group. A wrong was made right by simply excluding it from the movie !!! No punitive fines..


Amir Khan and the rest of the cast including Madhvan and Siddarth from South have done a good job and have lived the characters. Amir Khan is good but he should start doing roles at go with his age.

My favorite music director AR Rahman has scored for this movie and as usual has done a wonderful job. I like most of the songs but like the one my Lata Manageshkar in particular. It is very melodious and blends well with the movie.

I couldn't fail to notice the stark difference from the Tamil Movies, which mostly dishes out the regular fare of super hero/s, dream sequence/s in a exotic locale, unbelievable fights, various kinds of பாசம் (அண்ணன் / தம்பி பாசம், அக்கா / தங்கை பாசம், அப்பா / அம்மா பாசம்). Bollywood does dish out the regular fare too, but generally they have broken from this mould and have moved out to various subjects.