I don't know how long I would have taken to complete the Chennai Marathon today as I wasn't allowed to complete the event. I was stopped on my tracks by the police officers just after 3 hours near 28 - 29 KM mark. They told us that the Marathon is now closed and asked us to depart. Even when I was talking to the officers, the chaotic Chennai traffic came hurtling at us and we were forced to retreat to safer grounds.

Guess, only the experts can run Chennai Marathon. I wish, they had let us in on that secret. Incidentally, even the winner took around 2:36:00. 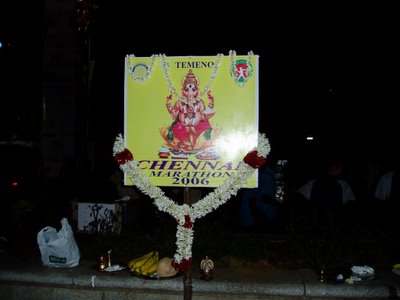 Gods were called to bless the event. Don't think it really helped. 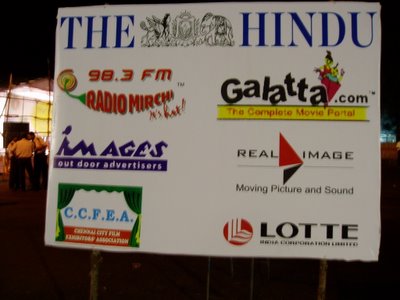 The event was sponsored by lot of companies. Still, the awareness level was very low. 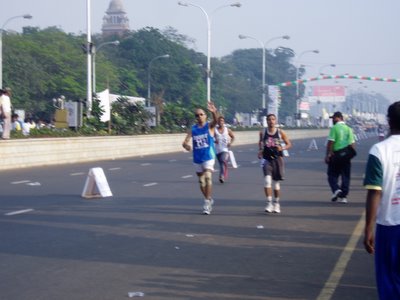 Yours truly and Hari at the 22 KM point

Some Observations & suggestions
Get Professional Event Managers
Chennai Marathon 2006 was organized by Rotary International with the help of lot of volunteers and sponsors. Unfortunately, they don't have the expertise required to market, plan & host such an event. These kind of events are better executed by professional event managers who have done it before and who do it on a 'full time' basis.

Market Better
An event like this should be publicized well and a concerted effort is needed to create awareness. According to a poll done by The Hindu, hardly 25% of the folks (age group 20 - 45) knew about Chennai Marathon.

Chennai media gave a cold shoulder to this event except for one radio station (Radio Mirchi). Even though The Hindu was an official sponsor of the event, they hardly helped in creating awareness about the event. The same paper allocated several columns of prime estate for some cine event happening on the same day.

Make participation fun & cool
Participating in this event was far from fun and wasn't easy. Full marathon runners had to go through various procedural hurdles prior to the event. If collection of the BIB was trying and was a put off, running was worse. Even though it was a marathon event, full marathon runners were treated shabbily. Organizers spent all their energy trying to manage the runners who had come to participate in the 5 & 10 KM runs. To make the matters worse, there were only about 200 runners in the full marathon category.

Give Time
Not every one is a professional runner to complete the run under 3 hours. Most of us were doing this for fun and it was disheartening to be stopped on our tracks. We needed all the encouragement in the world to complete the event and the last thing we wanted was the abrupt closure.
Internationally, cities close the traffic completely for 6 hours and practically give unlimited time for the runners to complete. In fact,a handicapped runner took 2 days in the London Marathon last year.