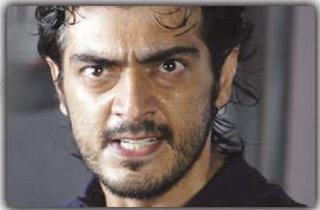 My customary practice of seeing a movie whenever I go to Nanganallur, took me to Ajith's new flick Paramasivan. This is a much awaited movie for Ajith as last few films didn't do well at the box office for him. I am not sure if this movie would do any better either.

One gets to see a new Ajith in this movie. He has lost lot of weight and appears slim and well suited for the role of an assassin. However, what hasn't changed are his monotonous dialogue delivery and comic dance movements.

Paramasivan has patriotic theme and the oft repeated Pakistan bashing. Its about a honest police officer (Prakash Raj) going after the perpetrators of terrorist bombings in Kovai in the most unusual way. He recruits a death row inmate (Ajith) to eliminate the perpetrators while having a secret plan of his own to eliminate his recruit after the job. This simple story line has been complicated by introducing all the regular masala ingredients that have become a must for a Tamil Movie.

The director, P. Vasu has also scripted the story line and the dialogues. He has done a fairly decent job with the story, but failed to keep it simpler and focused. There is a unnecessary comedy track with Vivek and a CBI track with Jayaram. Also, this movie would have been lot more tighter and simpler without a female lead. Laila's character doesn't jell with the movie and seem to have been introduced just to have some dance sequence. If Laila was unnecessary, Ragasia dance sequence in the jail was a total waste. At its best, it was a distraction and slowed the movie down.

The only redeeming feature of the movie is Prakash Raj. He is the second hero of the movie and does a great job of carrying the movie on his shoulders.

Grades
Story B - (for a good story line wasted)
Acting B (for exceptional performance by Prakash Raj & image make over by Ajith)
Music C (for mediocre score by Vidya Sagar)
Direction C (for a wasted opportunity by P. Vasu)