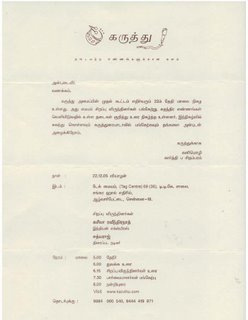 Just back from karuthu.com meeting. This site was recently launched by Karthi Chidambaram & Kanimozhi as a platform for anyone to voice their opinion. This meeting was held pretty close to my work, so decide to drop in. Though the crowd was rather thin initially, the meeting started as announced without waiting for the chairs to fill. The meeting was lively and thought provoking. Mr. Sathyaraj (actor) & Suseela Ravindranath (Indian Express) were the guest speakers.

Here are some of the thoughts expressed in the meeting:

Mr. Sathyaraj was funny and thought provoking. Some of his thoughts:

Suseela Ravindranath speech was short and sweet. Some of her thoughts:

Karthi Chidambaram spoke in Tamil and English and came across as a well read, knowledgeable person. Some of his thoughts:
Ms. Kanimozhi spoke about women's right and her right choose.

I liked several aspects about this meeting
Overall, a good attempt by Karthu, this is my Karuthu.
Posted by Ram Viswanathan at Thursday, December 22, 2005